Skip to content
Home / Delve into the Depths in the Kobold Blog / Hell Bound: Today’s Tools for Tomorrow’s Tyrants 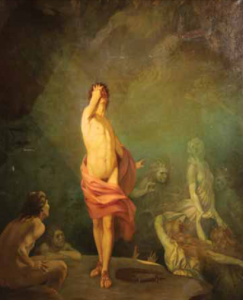 The machinations of Hell are complex, interlocking yet independent, all aimed to achieve one goal: bringing about its ruler’s dominion. Careful examination of Hell’s exposed plots reveals that it nurtures its pawns: tomorrow’s tyrants train extensively in its ways before they are unleashed.

In their shadowy temples, Hell’s disciples learn to achieve dominance over their peers, practice power plays, and study the proven tactics of a successful tyrant. Opposition to Hell’s rule is expected; crushing the inevitable rebellion is a standard part of the curriculum. Clerics dedicated to the tenets of Hell can choose from the following prayers in addition to the powers that are normally available to them.

Submit to Me (Cleric Attack 1)

The sheer power of your blows buckles the knees of your target.

You beat your foe repeatedly with your weapon, shouting your fell god’s name, rapidly breaking down your target’s will to resist your dominion.

You summon a coal-black fist of necrotic energy to clutch your foe.

Not every diabolical disciple has it in them to become a cleric of Hell. Some succumb to compassion and flee the halls of training, and others lack the natural ability to become a true cleric, but even they can still serve their fell god—if unwittingly.

Benefit: Choose one of the following 1st-level cleric prayers: domineering gaze, buckling blow, or tyranny triumphant. You can use that power once per encounter.

Prerequisite: Channel Divinity class feature, serves Hell or has access to the Tyranny domain.
Benefit: You can invoke the power of Hell to use reign of terror.

Encounter • Divine
Immediate Reaction      Ranged 10
Trigger: Another creature within range is successfully intimidated.
Effect: You can spend a healing surge.
Special: You must take the Reign of Terror feat to use this power.

Eventually, the disciples of Hell leave their halls of training. The most promising students often receive a gift, to help them subdue the masses and bend them to the students’—and ultimately Hell’s—will.

Worn on your left hand, this black velvet glove’s palm is lined with iron.