Skip to content
Home / Delve into the Depths in the Kobold Blog / Grand Duchy: Canine Creatures of the Domain 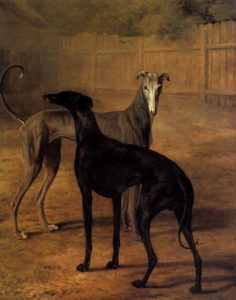 In some ways, the canine species of the Grand Duchy are generally well known—the association with wolves with elves predates their domestication by humans. Even so, there are strange canine creatures in these lands. Some are helpful, others more dangerous, and several have migrated south from arctic lands. These are examples of those found in the Pathfinder Roleplaying Game Bestiary 3 that also inhabit the Grand Duchy.

Adlet
The sentient wolves of the Northlands are sometimes a part of raiding parties to the Dornig coast. With a warlike disposition, the adlet are easily provoked into going a-viking alongside likeminded humans. That said, packs of adlet often take their lead from shaman leaders, who have a sense when a raiding expedition is warranted.

Akhlut
Dornig whalers often hold their harpoons in check when they’ve spotted an orca, lest they spear an akhlut by mistake. Even so, this hybrid of wolf and whale can be a fearsome foe when encountered in the frigid waters of the Nieder Strait. The akhlut prefer hunting amid the blizzards and rough seas created by its ability to control weather.

Animal Lord
If there is an animal lord known to city-dwellers, it would be the golden jackal lord Doreen Cayetee. She sometimes visits civilized lands to inspect the treatment of dogs and wolves kept by people and used as guard and attack dogs. Local lords consider a visit by Doreen Cayetee of great import, extending to her every hospitality. Even so, animosity between her and shepherding folk remains strong.

Cerberi
The three-headed brethren of hellhounds are employed as guardians by evil wizards and warlords. Vicious and intelligent, a pack of cerberi are formidable opponents.

Familiar, Arctic Fox
Among Donnermark mages, the white-furred arctic fox is prized as a familiar. The gains to its master’s reflexes are appreciated, true enough, but the white-furred creatures bestow a measure of prestige upon the magic users, too.

Graven Guardian
Constructed jackals have been imported from the Southlands for ages by magic users and nobles to guard their own gravestones or, better yet, those of departed loved ones. For a time, it was fashionable for elvish nobility to obtain graven guardians imbued with the domain powers of glory and rune, and many discovered in the ruins of crypts are often of that type.

Gremlin, Fuath
These dog-faced gremlins, found in mobs and schools, roam the Nieder Strait coastline in hopes of swarming over recent shipwrecks. When pickings are slim, they more boldly attack ships, scuttling them and drowning all aboard. They often target pirates, knowing the authorities will not seek retribution for attacks on them.

Jackalwere
Actually the nemesis of the jackal lord, the jackalwere of the Arbonesse and the Tomierran forests roam in packs, attacking and destroying remote outposts. It is the jackalwere’s ability to control jackals and make them work against their nature to attack good humanoids that brings these shapechangers in conflict with the jackal lord.

Shadow Mastiff
Native to the outer planes, these outsiders are used by evil clerics and wizards as guardians, scouts and hunters. The shadow mastiffs also do the bidding of powerful undead forces within the Grand Duchy.

Simurgh
The goodly, gargantuan flying creatures are few in number and prefer to live in the high places of the world. Even so, they can sometimes be glimpsed as they fly over the borders of the Wasted West, on the lookout for invading goblins. Yet, their greatest concern is guarding good folk of the realm against evil extraplanar threats.

3 thoughts on “Grand Duchy: Canine Creatures of the Domain”