Skip to content
Home / Delve into the Depths in the Kobold Blog / Gnolls! Raiders and Slavers 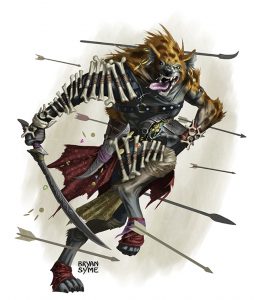 Come learn more from Wolfgang about the Southlands and its Kickstarter in today’s blog installment about gnolls.

One of the best elements of the Southlands, from my point of view, is that it features a hefty dose of hyena-like gnolls and their half-demonic, half-trickster-ish ways. Gnolls and I have been friends since the days of AD&D, when the Monster Manual made it clear that gnolls served a demon lord named Yeenoghu who was somehow associated with ghouls as well, and that gnolls basically loved to chew on the bones of their victims.

Gnolls were, in a word, badass. Sure, they were villains, but they were also so much more interesting than orcs and goblins. Gnolls have mangy fur and patron demons, and disturbing appetites and leaders called flinds, with their peculiar flind-bars. Their culture was bizarre, frankly, which just made me more curious about them.

And, of course, as creatures of the savannah and the tropical grasslands, they are perfect bandits, raiders, and mercenaries for the Southlands. Their tradition as slavers started in the core Midgard campaign book, where they serve the Glittering King. But even there, it’s clear that they are coming up north from their distant, dusty plains because the loot is good and the raiding is easy. So was their reputation as mercenaries and sellswords started.

In the Southlands, this continues, but with richer and more flavorful details. They have a new patron goddess, Laughing Nkishi, the Shadow Who Laughs. Some of them are not entirely evil: they are scoundrels, but not all are evil. And they have special gear, spells, and tricks of their own as player characters. They have been a little rehabilitated, civilized a tiny bit, but are still rascals and raiders at heart.

The gnolls of the Southlands, in other words, are still much more interesting than orcs.

You can join the other patrons of this project over on the Southlands Kickstarter page.

7 thoughts on “Gnolls! Raiders and Slavers”