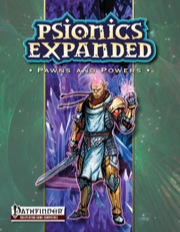 We’re venturing into the realm of “behind the scenes” a bit with an interview with Jeremy Smith, one of the people responsible for creating fun products at Dreamscarred Press. Take a look at this interview with him, courtesy of Jakeiol Rudd.

Jeremy Smith had his first publication, called Untapped Potential: New Horizons in Psionics, in 2006. Since that first success, he’s had a hand in creating numerous psionics supplements. Last year, his publication Psionics Unleashed (an update of the psionics rules for Pathfinder) was the biggest project Dreamscarred Press ever put on its plate. Since then, Dreamscarred Press has also released Psionics Expanded: Pawns and Powers, which is the fourth release in the Psionics Expanded series.

Jeremy runs Dreamscarred Press during his free time with his partner, Andreas Rönnqvist. When he’s not working on projects for Dreamscarred Press, his full-time job keeps him busy as a computer systems engineer in Dallas, Texas. This doesn’t interfere with his publishing work because he’s dedicated to releasing quality products. He listens to the fans, and he incorporates their feedback into his products because he really cares.

“If I was in it for the money, I’d have likely abandoned Dreamscarred Press a long time ago,” Smith says. “I’m passionate about psionics, which makes working on psionic products easy and fun. If I could do it AND pay my bills? Oh yeah, I’d do it full-time!”

Rudd: How did you first start playing roleplaying games?

Smith: I started roleplaying with the old red box set of D&D. When I first started, I was just a kid and I lived in a fairly rural area, so there weren’t a lot of other gamers. This was also back when RPGs, D&D in particular, had all sorts of negative stigma. So my gaming experience mostly revolved around the occasional game with one or two friends using the prepackaged adventure in the red box set. It wasn’t until I moved down to Texas that I got into more regular gaming, which was with the 3.x rules.

Rudd: What’s the most memorable event in one of your games?

Smith: Probably the most-quoted event in one of my games was in a side campaign we ran—basically, it was a break from our normal campaign when not everyone was available to play. We were exploring a world we didn’t know, we didn’t know how we got there, and we came upon a giant attacking a walled town. We attacked the giant because he was damaging the town. And the GM then had him run away from us yelling “somethin’s wrong!” The best part was the DM portrayal of it, like a confused three year old with a really deep voice.

The whole group bust out laughing and started quoting the giant. I don’t think that little campaign went beyond that encounter, but it’s probably the scenario we all reference the most

Rudd: Who was your favorite character?

Smith: Favorite? Had to be my psion. Interestingly, this psion bridged the gap between 3.0 and 3.5 psionics, so around the level 8–10 range, I forget which, he was “updated” to the new rules once the Expanded Psionics Handbook came out, since the rest of the game was 3.5 and he was still using 3.0.

Rudd: What other RPGs have you played?

Rudd: Why do you think you’ve never tried many games?

Smith: The most important thing for a DM to adhere to is to remember that everyone should be having fun, including the DM.

As for being a player–especially in games that aren’t one-on-one–your character isn’t the only one there. Don’t expect to have the spotlight on you at all times, and be a team player. A good DM will make sure you get your fair share of the spotlight, but you shouldn’t always expect it.

Watch for the second part of this series tomorrow!