Skip to content
Home / Delve into the Depths in the Kobold Blog / Fakir: Oracle of the Bazaar 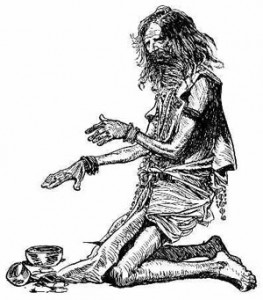 When Zubana made to leave the city of Lamakan, pursued by the sultan’s assassins, she thought back to the words spoken to her by the Witch of Nibraq. Because Zubana had lied to her, the witch replied with an evil truth: “The gods decree that Zubana shall lie dismembered on a street in Lamakan.” Zubana was not one to submit meekly to fate. All the same, as she traversed the city when first entering it, she gave a silver coin to every beggar and every idol she passed.

Zubana did not stop now for anything, knowing the sultan’s men were behind her. Just as she was feeling confident with her escape, Zubana tripped on something and fell to the dusty ground. She pushed herself up and saw a fakir looking at her through glaucomatous eyes. She had tripped over his begging bowl.

Forgetting the assassins for the moment, Zubana picked up the bowl and searched the dust for its spilled contents. She found only a single coin. Minted in distant Ilun, Zubana knew that only she could have given it to the fakir, and that only she had given to the fakir that day.

As she pressed the bowl into his hands, the fakir spoke to her, “Do not fear what the gods have decreed.” Then he lay his hands upon her and spoke a prayer in a tongue she did not understand. His words reminded Zubana first of the witch’s warning and then of the assassins pursuing her.

Zubana looked around and did not see the sultan’s men. She slipped into a dark alley. However, the assassins were waiting and they surrounded her. She bravely fought back, but it was no use. When the assassins had finished, Zubana’s limbs lay scattered just as the witch had predicted. Satisfied that she was dead, the assassins disappeared back into the shadows.

Yet Zubana was not dead. Before she could even consider how this was so, her severed limbs magically reattached themselves. As she looked down at her body, bloody but unscarred, the words of the fakir echoed in her ears. “Do not fear what the gods have decreed.”

A fakir is wandering ascetic who demonstrates the power of the divine through acts of physical endurance.

Class Skills: A fakir adds Acrobatics, Climb, Handle Animal, and Perform to her list of class skills. These replace the additional class skills from her mystery.

Revelations: A fakir must take the following revelation at 1st level.

Animal Charmer (Sp): You can fascinate animals and magical beasts at will. This ability acts as the spell animal trance, except you can fascinate a number of HD worth of creatures equal to twice your oracle level.

The fakir may select the following revelations in place of a mystery revelation.

A severed limb can hop, flop, or roll at half the character’s speed (rounded down to the nearest multiple of 5 ft.). It acts on the target’s turn using the character’s own abilities, except that the limb is treated as a creature two sizes smaller and suffers a –4 penalty to Strength and Dexterity. Any damage done to a severed limb is subtracted from the character’s hit points.

When the spell ends, if the target is still alive, all limbs within close range reattach. Limbs beyond this range die, but they can be reattached with a regenerate spell or a similar effect.

3 thoughts on “Fakir: Oracle of the Bazaar”