Skip to content
Home / Delve into the Depths in the Kobold Blog / Book Review: The Lady (Marakand #2) by K.V. Johansen 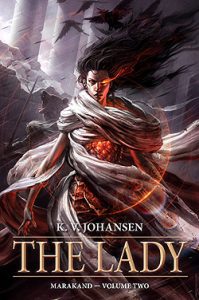 Ahjvar the Leopard, the cursed and undying assassin, has been captured. Well, actually, he is possessed by a ghost that gains power from death, and the capturing part came from the Lady of Marakand. He has been enslaved by her fell powers and, through the dark art of necromancy, has become the captain of her elite, undead red masks. His sidekick/shieldbearer/groom/caretaker Ghu is trying to free his friend and former master Ahjvar. Ghu has the ability to break the necromantic bonds that tie the undead to the living world, and Ghu’s loyalty knows no bounds. He is willing to do whatever it takes to free his friend, even if it means destroying what little is left of Ahjvar’s soul. Deyandara, who is the last of the royal bloodline of the Catairman, rides into a war-torn land that is as pox-ridden as it is blood-stained, seeking help from allies she abandoned months ago. They stand little hope of holding up against the terror-inducing, nigh-indestructible red guard, led by Ahjvar and the divine powers of the Lady. Meanwhile in the city of Marakand, rebellion stirs as the entombed gods Gurhan and Ilbialla seek to displace the Lady. The mortals leading this rebellion are a wizard, the shapeshifting Blackdog, and a bear-demon named Mikki. They can’t breach the divine magical defenses the Lady has established, and Moth, the only person who they think can help them, has vanished with the powerful sword Lakkariss.

This book, like its predecessor The Leopard, was difficult to finish. The Lady left me feeling like I had wasted my time. This book felt like a long trek through the desert with a very limited amount of water, no protective clothing, and a quarter bottle of sunscreen. I was lost, I was tired, and I was confused and not really happy. Johansen went big when she should have gone small, she went right when she should have gone left, and, in the end, The Lady was just as big of a hot mess as The Leopard was.

I’ve seen Johansen’s work compared to epic stories of the past, and style-wise that might be the case, but other than that I don’t see the similarities unless the classic fantasy novels were not as good as we thought they were. Reading this novel was like having a conversation with someone who is brilliant, but who presents things in a way that ends up sounding disjointed. Her attempt at creating an epic fantasy story felt like a bunch of semi-interrelated stories full of characters with unfortunate naming conventions that most readers will have a hard time even caring about. This whole story and plot line are complex and intricate—and not in a good way. I peeled through layers and layers of the complexity and the only thing I found were more layers. I have this feeling that Johansen has such a big story to tell and so few pages to do it in. The version of this book that I read clocked in at 442 pages, and I don’t think it was enough. There are many merits to epic fantasy when done right—this was not one of those times.

I got worried as soon as I realized that the Dramatis Personae was almost ten pages long, and I’m pretty sure it went from A to Z. That is a large number of characters worth mentioning for a series that has less than one thousand pages between two novels. Several of the names mentioned are actually aliases that some characters go by, which, rather than adding intrigue, just adds to the confusion. A few of the characters are possessed by spirits, or gods, or whatever. At times, one character could be called several different names in the same conversation. Then there were times when whatever was possessing someone would talk with the vessel, while the vessel was in the middle of a conversation with someone else. Most of these instances were in italics, but even that wasn’t a big help. This not only got very frustrating, but it led me to believe that Johansen was writing from a stream of consciousness rather than using it as a literary device. All of that was bad, but the worst thing for me was that in the end I didn’t care about the story or the characters. I got to spend way too little focused time with any one character to develop a love or even a like for them. I felt like there were things that Johansen thought she told me that were germane to the story that I wasn’t actually told, or, if they were mentioned, the conversation was so noisy that I couldn’t hear it through all the other people talking in other people’s heads.

I could go on, but you get the idea. I don’t know what this series needs, but it needs something quickly. I hope that this is only two books long, but I don’t think it will be. I’m sure there are readers out there who are not just buying these books but also enjoying them, and I’m always happy to see that. But for me the only reason I will read any of the other books in this series is if they are sent to me to review, and, based on pattern analysis, I doubt I will even remotely enjoy the experience.