Skip to content
Home / Delve into the Depths in the Kobold Blog / Book Review: Myths and Legends: Robin Hood 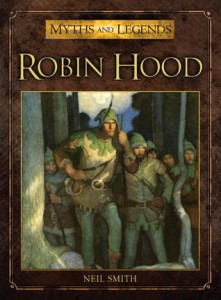 Myths and Legends: Robin is yet another amazing addition to the already formidable Myths and Legends series. This installment includes all of the usual suspects one would expect from the Robin Hood mythos. There is Little John, Friar Tuck, Maid Marian, the Sheriff, and Will Scarlett, to name just a few of them. Now, if you are not familiar with Robin Hood, I can break the mythos into a few quick sentences. He robbed from the rich and gave to the poor. He was an amazing archer who lived in the woods. That is Robin Hood really simplified—those familiar with Robin Hood know just how simplified that description is.

In keeping with the Myths and Legends spirit, Smith and company tell us some of the legends that have contributed to the subject matter, transition to actual historical information, and then close us out with a look at their current place in popular culture. This format really works for this series and, more importantly, for me as a reader. Many of the legends in this book I already knew—or at least thought I knew. There were several nuanced aspects of these stories that I have never heard about, and that made revisiting them even more worthwhile.

Learning about the ambiguous historical timetable when Robin Hood might have actually lived was literately the stuff of legends. There is speculation as to when he might have lived, but that is all that it is: speculation. I know how frustrating this must be for most history majors, but from where I’m sitting, this just added more flavor to the stew that forms the Robin Hood mythos. Not only is the time period that Robin Hood might have roamed Sherwood Forest in question, but so is the person upon whom Robin Hood is based. A healthy list of possible candidates is listed in the book, and all of them have a bit of the Hood in them.

After reading this book, I am convinced that Robin Hood is a mash-up of the Arthurian Legend and the Canterbury Tales. For instance, in legend, Friar Tuck had a large pack of hunting dogs at his command—sound familiar? Corrupt church officials, chivalry, castles—you get the idea. Robin’s use of the longbow, the weapon that helped England rule the world, speaks of Robin as a representation of the English fighting spirit and their rugged sense of justice and chivalry. This book really showed me that in many ways Robin Hood is to England like Superman is to America.

Once again the illustrations really make this product shine. The full-page artwork by Peter Dennis had a really refined the Prince Valiant feel. Dennis’s style worked so well with this product that it almost brought me to tears. The inclusion of some brief information and commentary about the original art pieces from the artist (Dennis) should be standard for future Myths and Legends books. The layout of this book was an improvement over some of the past books in that there were fewer sidebars and the text flowed much more smoothly. Like their King Arthur installment, this book would have done well to have included a master map to give us colonists a better idea of just where Robin Hood might have roamed.

It is really good to watch this series evolve. Most of the changes are minor, but I feel like Osprey and their authors are reading the reviews and trying to give their readers what they want. There has been no need to overhaul the Myths and Legends series—just tweaks here and there are perfect. The artwork, as always, was a great mix of historical photos or images combined with original work that made it all come to life. This installment will not leave you lost in the woods.