Behind the Spells: Unseen Servant

Welcome back to Behind the Spells, the series that provides a historical background, secret effects, and related material to classic spells of the world’s most famous fantasy roleplaying game. This 11th installment concludes our series of Behind the Spells; we hope you’ve enjoyed the series. As always, the rules (presented after the “Spell Secret” header) are compatible with any 3.5/OGL fantasy game, and the story is narrated by an ancient gold dragon named Maxolt Alberiim. 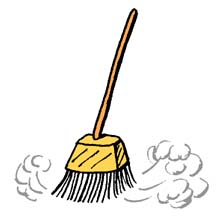 Creator
The tale of unseen servant is a short but cautionary one. Mindoc Vratt—a human wizard of minor ability—studied under Foran Poltt, creator of summon monster. With a short attention span and a phobia of dirt, one wonders why Mindoc dabbled in the arcane ways at all. The answer lies in two words—his wife. He married into his love’s wealthy smithing family and, regrettably, thereafter did little of any consequence. After winning the new spell contest at the Thesktin Magefair, apprentice hopefuls flocked to Foran’s door. He selected them all according to their innate talents, save for Mindoc, who became an apprentice because Foran needed the gold.

As with all of Foran’s apprentices, Mindoc’s final task before graduating to wizard status was to create a new spell. The human knew exactly what he wanted to create. Combining his dirt phobia and an almost fanatical dislike for familiars (“Why would you want a creature that harms you when it dies and, gods forbid, defecates where you least expect it?”), Mindoc set about to create what would become unseen servant, originally titled “arcane maid”. The process ran into obstacles from the start.

Some of the central phrasing the spell needed stumped him, and the deadline to hand over the new spell drew nigh. After overhearing yet more glowing praise for Foran’s summon monster from a visiting wizard, Mindoc decided to use his master’s spell as the core of his own. Why not, he reasoned. Both spells essentially do the same thing, right?

Despite this shortcut, the “arcane maid” performed as expected, gaining Mindoc wizard status as well as praise from his colleagues. The invisible form could perform the rudimentary tasks commanded of it but the animating force eventually proved to be quite different than anyone could have realized. For decades later, after an unseen servant was conjured near her, a psion named Fedohna sensed a presence where the spell’s supposedly mindless form toiled. She spoke to the entity instead of simply commanding it, as everyone before her had done.

“Are you alive?” Fedohna asked.

After conversing for hours with the creature, Fedohna and the conjuring wizard went to the Council of Hebris, the owners of the spell following Mindoc’s death and the largest arcane body of that time in the region. Council wizards scrutinized the spell and discovered what Mindoc had done—by inserting the summon monster component, Mindoc had inadvertently summoned an invisible creature. The arcane construction and material components of the spell caused it to summon the same type of creature every time it was used. In this case, the creature was called an invisible attendant, a monster created during the Elemental Riftwar.

As for unseen servant, the arcane workings were changed to conjure a mindless and shapeless form to perform the desired mundane tasks. An apology was offered to all invisible attendants, starting with the one Fedohna discovered. Fortunately, their unique mindset precluded the possibility of retaliation for what amounted to decades of magical kidnapping and slavery.

Though few know it, Mindoc’s unseen servant can deliver touch attacks, since he wanted his new spell to replace the use of living creatures. Regrettably, the arcane phrasing within the spell requires extra verbal components that did not quite make it into the final version.

By making a successful DC 21 Spellcraft check while casting unseen servant, your servant can deliver touch spells for the duration but is in all other ways restricted to the normal spell limitations concerning distance from caster, etc. When delivering the touch spell, the caster makes the touch attack roll after the servant has entered the target’s space.

Because this secret usage capitalizes on an uncompleted section of the spell, the servant might collapse when used this way. After successful use of a touch spell, the caster must make a Concentration check (DC 15 + touch spell’s level). If he is successful, the servant continues to functioning while failure ends the spell.

Related Research
The new creature uncovered by unseen servant’s creation is a curious one. Few have encountered the invisible attendant (or at least realized they encountered it). Fewer still have discovered its single-minded directive and, thus, failed to uncover perhaps the greatest storehouses of information that ever existed.

Ecology
Environment Any, but based in the Elemental Plane of Air
Organization Solitary, pair, or cadre (3-5)
Treasure None
Advancement None

Special Abilities
Steal Breath (Su) As a standard action, invisible attendants can instantly suck the air out of a single 5-ft. space they are adjacent to. Any creature in the target area that breathes reflexively chokes and must succeed a Fort save (DC 12) or be dazed (unable to act) for 1 round. The save DC is Constitution-based.
Natural Invisibility (Su) This is a constant ability that is inherent and not subject to the invisibility purge spell.
Tongues (Su) Invisible attendants can speak with any creature that has a language as though using a tongues spell (caster level 5th). This ability is always active.

Like their invisible stalker cousins, invisible attendants have amorphous forms which appear only as swirling clouds of vapor if proper detection is employed (true seeing).

Behind the Spells: Unseen Servant is the eleventh in a series produced for KoboldQuarterly.com by Tricky Owlbear Publishing, Inc.