Skip to content
Home / Delve into the Depths in the Kobold Blog / Bait & Switch: Fishers of Men 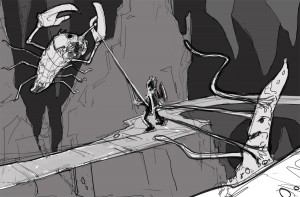 It’s not easy being a monster in the Pathfinder Roleplaying Game. Over time, adventurers and monster hunters have a significant impact on monster populations, leaving only the strongest, luckiest, and most cunning to survive. Sometimes, though, monsters band together to increase their chances. They use their powers to complement one another and, in turn, present a challenge that is far greater than either could muster alone.

Ropers, like many intelligent creatures, often find that they have a certain affinity and affection for creatures of lower intelligence… And so, they sometimes take other creatures as pets. Many ropers find that they have an affinity for cave fishers. There’s something that touches ropers on a primal level about the hunting methods of these vermin, and they sometimes tame and keep a group of cave fishers nearby as pets, guardians, and sometimes snacks. The cave fishers benefit by being able to take on larger prey with their master’s help, and the usually solitary roper gains the company of loyal guardians whose skills complement its own. The CR reflects a group of five cave fishers and their roper master.

Both guardians of the wilds and chaotic fey, dryads and nymphs often have much common ground on which to interact. Both are bound to a geographical area and both have a mutual interest in preventing those unkind to nature from getting near their territory. Thus, it is not uncommon to see these two creatures form something of a coven, where the nymph acts as information gatherer and networking center. Using their talents for the good of the whole, they ensure that every dryad knows what goes on in the forest the moment another finds out. When one or more members of the network are threatened, the others send aid in one form or another, surprising would be lumberjacks and poachers. When not defending the forest, the network is used purely to spread gossip, silly rumors, and tales of fleeting dalliances among mortals. The CR reflects a group of three dryads and their nymph ally.