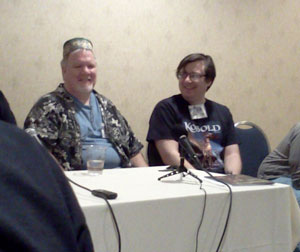 It’s Saturday at PaizoCon 2011. A crew of panelists congregated in a not-so-hidden location to share their collective wisdom and secrets regarding small press publishing. Among these industry worthies: Wolfgang Baur (Open Design), Ryan Dancey (veteran industry professional), Lisa Stevens (Paizo CEO), Dale McCoy (Jon Brazer Enterprises), Stan! (Super Genius Games), Scott Gable (Zombie Sky Press), and Clark Peterson (Legendary Games). One of the major points they discussed: Getting your name out there can be the biggest challenge for a small press. You can read more of what they shared beyond the jump.

As the discussion flowed, the panel tackled another big topic: digital vs. print publication. They talked about how PDF publishing gives you an opportunity to publish things you’d never print, but print has an advantage over digital publishing because it places your product in front of audiences in hobby stores.

Wolfgang agreed that PDFs give publishers a chance to test the market for a product. “Customers will tell you what they want. We put out Advanced Feats as a PDF series, and people started asking me when they would see the compilation. They were essentially saying we bought this from you once, and we’ll buy it from you again.” 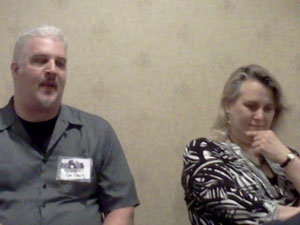 Another topic the panel discussed was that of getting pitched ideas. As Wolfgang said, “If you’re too coy with your ideas, a publisher will say, ‘Well, you say you have a great idea but you won’t tell me what it is—I’m going to listen to someone who will tell me what they really want to do.'”

Overall, the panel emphasized the importance of getting your work out there and delivering consistently. Don’t send an idea; send a manuscript. Consider releasing some work for free to build credentials and an audience. Doing so also demonstrates that you can see a project through to completion, and that’s something else small publishers look for when it comes to those they might want to work with in the future.

The kobolds have been busy at PaizoCon today, so watch for more updates as Saturday unfolds. Maybe they’ll share more secrets, eh?