Skip to content
Home / Delve into the Depths in the Kobold Blog / A Broken Mind: Sanity and Mental Disorders… for Pathfinder Roleplaying Game (Part 2) 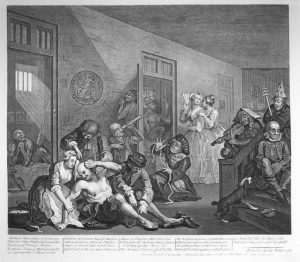 Here it is! The second and final installment of the Pathfinder Roleplaying Game version of the article “A Broken Mind” from Kobold Quarterly #11.

The original article details new rules for introducing sanity and mental disorders to your 4th Edition game. So now, you can break minds no matter the edition because edition should simply never be a reason to forgo causing serious harm to your characters in fun, new ways. (And don’t think you won’t be making a sanity check yourself once you’ve read this article!)…

It is possible that I am mad now, at those times when the gulfwardsliding tide of memory sweeps me away; those times when I am lost anew in the tracts of dreadful light and unknown entity that were opened before me by the last phase of my experience. But I was sane at the outset, and I am still sane enough to write down a sober and lucid account of all that occurred.

—Clark Ashton Smith, “A Light from Beyond”

Of course, losing Sanity has consequences. If you lose 5 or more points of Sanity from a single roll, you go temporarily insane. If you lose a fifth (1/5) or more of your current Sanity in 1 game hour, you go indefinitely insane. If you lose all your Sanity, you go permanently insane, and you are bound for retirement to a nice, padded cell. Choose a disorder randomly or as appropriate from the incomplete lists below or create a new disorder.

Indefinite insanity has no defined timeframe. It is not something you can just slough off. You will have to try to live with it or take great effort to find a cure. A cure might be a forgotten incantation buried in a forbidden tome, years of therapy and meditation to come to terms and control the underlying problem, or addiction to a dangerous drug or artifact laden with unwanted side effects but capable of suppressing the disorder for as long as you’re willing to indulge. A cure could come in many forms, but it is always at a steep cost.

While you are temporarily or indefinitely insane, you are not immune to additional sanity loss, but you can have only one temporary disorder and one indefinite disorder at a time. If you have one of each and a conflict arises between the two, follow the indefinite disorder; if necessary, the GM should couple disorders that work well together. If you lose enough sanity to develop a second temporary disorder, instead add an extra 1d8 days duration to the existing one.

The restoration and greater restoration spells can be used to remove a temporary disorder but not an indefinite disorder. For this purpose, the disorder is considered equivalent to a permanent negative level. However, these spells can never restore lost Mind or Sanity.

When you go temporarily insane, you develop temporary disorders as conditions. While so afflicted, you begin any encounter suffering its effects. However, with a successful Mind saving throw (see Making a Sanity Check above), you can temporarily suppress the disorder’s effects until the end of the encounter. That is, the madness affects you for a few rounds at the start of the encounter, then the PC masters it and can act normally again.

Unfortunately, the effects return during the next encounter. Once the 2d8 day duration is over, however, you no longer suffer from the disorder.

These disorders continue to affect characters outside of combat and most certainly guide character decisions, but this must be guided by roleplaying.

The fear takes you, as well as the urge to flee.

Does that hurt? How much does it hurt? Ha ha ha!

That monstrosity must die, and soon!

Why do you dog me so?! Your face is everywhere!
(Roll a d6 to determine your actions for the round.)

I am invincible! I dare you to strike!

When you go indefinitely insane, you develop an indefinite disorder. There is no clear-cut cure for it, and you can’t simply suppress it with a saving throw.

Design Note. These disorders are intended to roughly be a wash for their total penalty and benefit, providing primarily a fun mechanic to help flavor a character. For more gritty and grim adventuring, it is easy to ramp up the penalties or ramp down the benefits.

You are irrationally and intensely afraid of something.

Your mind is a jumble of disorganized thought, and those ideas are frequently intractable with what’s real.

You careen back and forth between the dizzying heights of mania and the lows of dismal loneliness and self-loathing.

Effect You cycle between mania and depression; roll 1d2 each day to determine (1 is depression, 2 is mania).
(Depression)
You gain immunity to mind-affecting effects, but you constantly suffer the effects of slow.
(Mania) Your speed is doubled, and you require half the sleep, but you can only gain half the benefit from any healing. Each consecutive day of mania adds a cumulative -1 penalty to all saving throws.

Effect You gain a +5 bonus on all Charisma-based skills and a +5 bonus to saving throws against fear effects, but each encounter, you randomly “forget” one of your class abilities and can’t use it for that encounter.

Your mind is filled with anxious and intrusive thoughts, triggering your obsessive-compulsive behaviors.

Effect The obsession and compulsion components below are both always present.
(Obsession) Casting times on spells and incantations are increased (standard actions replace move or swift actions, full rounds replace standard actions, two rounds replace full rounds, etc.), but durations are doubled. You gain a +5 bonus on both Perception and Stealth checks, but you can never take 10 on them, and they take twice as long as usual. You take a -5 penalty on initiative rolls.
(Compulsion) Choose a small set of behaviors; you must perform these at least daily. Failure to perform the behaviors regularly leaves you incredibly distracted until you perform them, suffering a -4 penalty to all d20 rolls.

You are convinced that certain individuals are coming for you.

Effect You gain a +5 bonus on Perception and Sense Motive checks and a +10 bonus on initiative rolls, but you automatically fail saves for all fear effects.

Everyone roll san checks! And, for hygiene’s sake, clean your brain matter off my copy of Kobold Quarterly #11. Now, convince me that you are indeed not after my bag of magic beans?