Skip to content
Home / Delve into the Depths in the Kobold Blog / A Baleful Eye: Call of Cthulhu Now Available 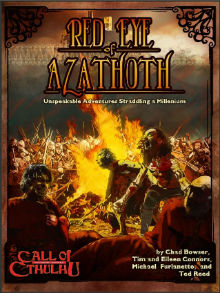 In 887 A.D., on an island off the east coast of England, the Vikings celebrating their sack of a British monastery fall silent when the night’s burgeoning storm clouds roil back to reveal a red comet low in the sky. As a haunting, discordant sound of flutes echoes across the bleak landscape, a rain of blood begins to fall, and the cadavers of Vikings and butchered monks strewn across the shore stir and begin to rise.

Deep in the defiled monastery, Brother Calhoun leans against the scriptorium’s shelves, clinging to consciousness. He slits his wrist, holds it out, and asks his last question. Brother Hallow, his innards dangling from the Viking axe stroke, grips Calhoun’s wrist to his mouth, drinks long, and then answers with dead eyes. “The Lidless One seeks the song that keeps great Azathoth asleep, so that he may unplay it. Silence the music or all die tonight.”

And so it begins. Something from beyond sanity’s borders strives to strip away the protections that keep the mindless Outer God Azathoth unaware of the worlds of man. Those that oppose this madness are cursed to be reincarnated to fight for humanity’s survival each time the Red Eye of Azathoth looms in the heavens. Time and again across the centuries, they stand alone — in the frozen mountains of feudal Japan, in the burning streets of the Inquisition sweeping Valencia, Spain, and the New World’s doomed Roanoke Colony. Each time, at terrible cost, they uncover more of the dark design.

Desperation
In 1887, in the dying Arizona Territory mining town of Cañón de Espiración – a place that folks calls “Desperation” — a crippled gunfighter huddles over a flickering hurricane lamp in the attic above his empty firearms shop. He speaks low in a voice like sliding gravel, his words just audible over the horrid winds outside. “I’m holdin’ out, ya know. I’m still holdin’ back them urges that’s taken all the others. But my dreams are so blood-soaked I don’t want to sleep no more. The whole town’s tremblin’ on the brink.”

“Whatever’s behind all this, I can feel it comin’ now. Tonight, it’ll break through to take us all. This is our last chance, the final stand. But they got their eyes on me now, and I can’t slink about unseen with but one good leg. And… and I ain’t sure how much longer I can resist. You can’t stay here no longer, ’cause I’m beginning to… to…”

The nightmare winds tear at the shutters, and a lurid glow seeps in. The old gunfighter squeezes his eyes shut and holds his head, rocking for a minute before settling. “I’m thinking,” he whispers, drawing out two hidden pistols and turning their butts outward. “Maybe… maybe you can use these better than me.”

Take Up the Challenge!
The Red Eye of Azathoth has been 2 years in the making, and it is likely to become a classic adventure in the Call of Cthulhu canon. Numerous experienced playtesters went so far as to call it “the best Call of Cthulhu adventure I’ve ever played”. Grab your copy today!

4 thoughts on “A Baleful Eye: Call of Cthulhu Now Available”