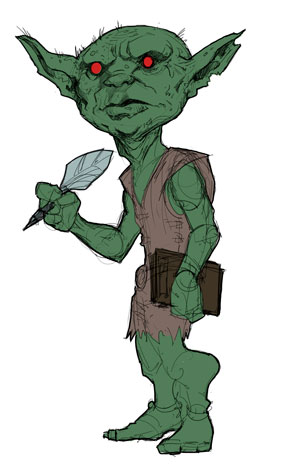 As ever, readers who are new to the diary, please scroll down a bit to where you see the Thppgrg tag. Click on it. Yeah, that’s right. Otherwise, if you missed part twelve, you can just click here. (Art by Chris McFann.)

It turns out that payday for the Exceptionally Evil Corporation is on Fridays. And that Dark Lord Tolkelheim, when he wasn’t telling me to burn for all eternity in the fires of goblin hell or wandering around drunkenly animating mindless undead in a haze of whiskey and rotten unicorn hearts, was also conveniently forgetting to give me my checks.

After federal, state, county, local, municipal, dimensional, temporal, general, and campaign-setting-specific withholdings, plus dues to the monster-union—apparently I’m in a monster-union, who knew?—and deductions to Social Security and an employee health care plan, which according to my new pamphlet includes: (a) 1 (one) swift brick to the back of the skull in the event that I am unwilling or unable, due to illness or injury or for any other reason, to perform my job, and (b) nothing else, I am left with seventeen copper, three electrum pieces, an acid-burned masterwork scabbard for a Tiny-sized trident, and a badly bent and nonfunctioning pocket-watch engraved with a severed bunny-rabbit head which might have had silver on it at some point in the indeterminate past.

Holy crap, I am the richest goblin EVER—tonight, I dine like a king! Rats and rat-based beer for all my men! In this instance that’s me and Jimbo, and also—somewhat randomly—Mr. Bliss. He popped by today to tidy up the demon-faced monument outside the door to the strategically important magical fountain room; he was polite enough not to ask too many questions about who might or might not have defaced it with the words  “Warning: this statue spits cotton candy at goblins (and also at semisentient toxic slime molds),” and warmly accepted our invitation to impromptu fondue and strategically important poker night.

Apparently his wife, Mrs. Bliss, has a transdimensional book club on Friday nights. Must remember to find out what they’re reading. Also, see if I can snag an invite.

In other news, I do not get a sexy dwarven lady secretary. Larry the he-medusa was strongly in favor of it, especially when I made it clear that it’s primarily—or, I guess, “entirely”—so that I might woo and subsequently date her, but it seems the big bosses are holding out for my next performance review.

Must remember to try to “wow” them.

ALSO: must try to figure out what it is, technically, that I’m supposed to be doing here at this job. If my awesome new boss Larry is any indication, my actual responsibilities in management will mostly involve chuckling at forwarded emails about rust-monsters, drinking paint-thinner-flavored liquors with unpronounceable names out of oddly shaped glasses, and practicing my golf swing.

I do, it seems, get to hire on three direct subordinates to take over the more menial aspects of my job so that I can focus on that aforementioned management—which would, in my case, be guarding the strategically important fountain, whacking those stupid poisonous centipedes with a stick when they crawl out of the spiked pit, and (apparently) ringing a very large bell every time I spot cultists lurking in the haunted woods.

Was not previously aware that there was a cultist problem in the woods, or that I was responsible for being on the lookout for them. Have convinced Larry the he-medusa that the cultists are very sneaky, might be using invisibility cloaks, and are probably up to something involving a dwarf who may or may not also be a pirate. I’ve suggested burning down the entire forest just to be sure we get him; Larry has enthusiastically given that plan the stamp of approval and sent the request up the chain of command.

As to those direct subordinates: there are many qualified applicants for the positions in question, including a supposedly “mighty” mite named “Mighty Mike” (he has an official note in his file that he will be taking a level in barbarian as soon as he gets some XP), an evil pseudodragon named Kyle with, quote, “a troubled past and nothing left to lose”—that’s written on his resume, I should note; his penmanship is excellent—and a CR 17 ice elemental druid/monk with a master’s degree in art history named Dan who was downsized from his last gig at a flying zombie-castle and is willing to take pretty much any salaried job.

Unfortunately, the “human” resources department here at the Exceptionally Evil Corporation is pretty strict about hiring practices and would prefer for me to go with nepotism. And I know what that means.

Monday morning I am going to be working with Neil, who hates me, and we’ll be training my three idiot nephews: Pp’grgth, Grg-thpp, and Winslow.

I am staring at their resumes right now. They are both dumber and sass-mouthier than I remember them. There is not enough rat-based beer in the world to make me okay with this.

But I am willing to test that theory.