Skip to content
Home / Delve into the Depths in the Kobold Blog / Under the City: The Laboratorium 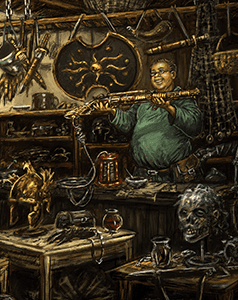 There’s a city not far from here, much like any other. On its surface, it’s full of life in the usual well-kept, mostly ordered snapshot of urban living you’re familiar with. But below its streets, there lies abominations, filth, and history.

Complete with alchemical vaults, dungeon cells, moonshine pubs, secret libraries, and unnervingly sterile laboratories, the spaces below intersect the sewers and various natural formations, such as an underground stream and a colorful limestone cavern filled with unique formations. Old tunnels meander here and there, but most of the shallow ones are filled in to support the large buildings above. Deeper tunnels exist but go unmapped.

The ancient foundations of the city’s first permanent settlements are accessible through subterranean fissures and, in places, are close to street level just below the topsoil. In general, though, most shallow tunnels are utilitarian. Some have hissing tubes that snake along the ceiling. Inside them, leather carriers move scrolls and other objects, pushed by magical puffs of air initiated by maesters and scribes. Other tunnels channel a chunky effluent soup from the district’s kitchens, laboratories, laundries, privies, and stables. Fed by cisterns filled with rainwater, the pipes move fresh water around the city.

It has numerous entrances: some secret and others hidden in plain sight. These doors are located in the district’s tavern basements and the root cellar of at least one old building, but such entrances only permit access to the common area of the tunnel system; this is where you’ll find assassins, delivery boys, and smugglers.

All of this sits atop the underground complex called the Laboratorium. Passages orbit it in rings with security increasing as one moves from the outside ring toward the inner ones. Entrances to the outer ring of tunnels are barred, guarded, or plugged. Continuing deeper into the complex, there are inlaid runes that protect entrances as well as clockwork traps. Some traps help ensure it has a fresh live catch of research patients while the traps that protect vital areas of the complex are lethal, possessing toothed clockwork death gears.

Rats are synonymous with the Laboratorium. They are cat-sized, vicious, and transmit sewer plague. The rats’ territory ranges from the levee at the river to the undiscovered crystalline cave beneath the temple district. The grey, greasy rats carry scraps of food and flesh back to their warren, a vaulted sewage tank by the river and throne room of the rat queen. A collapsing antechamber serves as the queen’s nursery where blind, squirming pups feed on anything they can sink their teeth into, including each other.

On especially hot nights, creatures emerge from beneath the city, through building floors and street-level sewer grates. Word among the tunnel crews is that the things are bred to provide poison and dispose of waste, but they sometimes get loose. The tunnel crews were most worried for their adopted otyugh Abby.

Raw taboo magic is unleashed in the Laboratorium (or just the lab). It is within its salons that the dead regain their senses. There are also medical experiments conducted here, procedures whereby such and such is removed and this or that is reattached or sown in. The experiments go horribly wrong more often than not but are always exciting and informative. Other lab salons are for the grim harvest—the tapping, siphoning, and storage of life energy—with even more rooms dedicated to autopsy, whether the patient be dead or not. The corridors are tiled, long, and featureless and the doors nondescript. There are illusions in place that make hallways seem infinite, and door numbers change at will. There are shadows too, and they move. Flickering blue soul-powered lamps provide the lab’s only light source, and underneath the eggy sulfur smell that permeates the complex, there is the coppery trace of blood.

In the northeast corner of the complex is a large stone foundation from an ancient temple discovered during excavation work. The big stone walls were incorporated into the lab and became a holding area for the undead patients. Though the lab is relatively dry thanks to a buried clay rampart that keeps water from the nearby river out, riverbed ooze has popped the tiles off one tunnel and bleeds down its wall. In an especially rainy season, one of the lab’s deepest levels filled with the reddish-brown stuff. It took another season to shovel out the sublevel, which ended up used just for burials anyway.

The Laboratorium is where the Master works. He is an accomplished wizard and eldritch warrior and is assisted by Nurse Hilde, who has long, black hair and a purple hue to her skin. She wears a stained miniskirt and top, revealing the scars of her patchwork body, and a leather garter holds her favorite operating implements. Besides Hilde, Rogi is always at the Meister’s side. Rogi is huge, scarred, ugly, and muscular, a worse-for-wear barbarian that does all the heavy lifting and chopping around the place. And at their disposal is a group of the local magical college’s finest acolytes, minions, and students.

Patients are paralyzed with poison before orderlies restrain them on cold, squeaky gurneys. On their way to the operating table, they pass the squishy insides of countless creatures on display, including a mounted human nervous system (eyes and brain intact), and onward, where clockwork machines dissect the living. The machines probe and catalog tendons and muscles in use, immune to patients’ screams. One automaton specializes in opening chests and craniums, delighting in testing hearts and brains to see what makes people tick. This rather eccentric automaton has taken to covering its mechanical parts with skin taken from the most attractive patients it encounters. Right now, it wears the face of an elf, and its mechanical eyes stick through the empty eyeholes of the bloody facemask.

The Master waits in the Laboratorium’s main operating theater, OR-1. He waits beside a grooved metal table lit by an articulating flood lamp. Nurse Hilde is at the Master’s side and polishes his favorite scalpel on her torn stockings. Rogi is there too. He waits quietly in a corner with a cleaver in his hand. Several assistants scurry about. They set up instruments and ready scrap buckets. One of the assistants kicks an old discarded chunk of flesh down a hole in the floor.

The garbage hole leads to the old critter pens where small folk now have to cart off ever-growing piles of meat to a mechanical grinder. A sluice channels the emergent goo to the nearest drain. Several students stand against the walls of OR-1. They wear pink-stained white cloaks and wait patiently. Some clutch books while others hold empty organ jars. Everyone turns and stares when the patient rolls in. The Master gets to work.

The Laboratorium offers students insight to the inner workings of death at its most fascinating and intriguing. Impressive as the archive of cataloged deaths may be, the library experience brings nothing to the table. To have something on the table, squirming and screaming, alive for the moment until delivered an academic death, well, that experience is irreplaceable. Below the city, the Master waits for you to explore and delve into research.

The Master is tall and gaunt, a grey-skinned, educated aristocrat that displayed great manual dexterity, a propensity for the scientific method, and a talent for anatomical drawing.  Known as the Master of Death, he delights in discovering new biology.  He can cripple opponents, unleash terrifying area of effect spells on them, and escape in a pinch with dimension door.

Spellcasting. The Master is a 9th-level spellcaster. His spellcasting ability is Intelligence (spell save DC 17, +9 to hit with spell attacks). He has the following wizard spells prepared:

Rogi used to be an adventurer, though his brutality saw him expelled from every party that he joined. He fell in with the city’s criminal underworld, but even then his love of violence caused too many problems for that line of work. He’s found a home in the service of the depraved Master, severing limbs, disposing of bodies, and unleashing his bloodlust on those souls unfortunate enough to intrude upon the Master’s work.

Gas Mask. Rogi is immune to the effects of stinking cloud and similar gaseous or particulate matter.

Rage (2/day). As a bonus action, Rogi can enter a rage, granting him the following benefits:

His rage lasts for 1 minute or until he falls unconscious or ends his turn without attacking a hostile creature or taking damage.

Half-Undead. Hilde has immunities to poison, being poisoned, and being exhausted like an undead monster. She counts as an evil undead for features and spells that detect undead, though she counts as humanoid for features such as turn undead and divine smite.

Scalpel! Nurse Hilde handles supplies for the Master’s experiments and has a seemingly endless supply of sharp implements and vials of various liquids. She always has at least one knife on hand and can apply poisons as a bonus action. When she dies, her remaining vials are smashed and useless.

Administer Healing Potion. As an action, Hilde can throw a healing potion to a target within 20 feet, which they can use their reaction to catch and consume immediately. The healing potion restores 7 (2d4 + 2) hit points on use.

3 thoughts on “Under the City: The Laboratorium”