The Order of the Septime Lancers (Part 2 of 2) 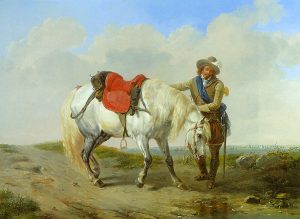 The constant warfare and border skirmishes of the Seven Cities spawn many mercenary companies and warrior orders. One of the largest and most well known is the Order of the Septime Lancers…

Control of your position on the battlefield is key to a swift victory. You take a moment to note where the proper footholds are and dance across the battlefield as if there was nothing in your way…

Encounter • Martial, Stance
Minor Action    Personal
Effect: You assume the slyboots stance. Until the stance ends, you ignore difficult terrain when you shift. If you are mounted, the effect also applies to your mount.

Your enemies are foolish to try a charge against one of your order. Their poor aim only gives you more opportunity to flourish.

You run down your target, skewering him with full force before quickly drawing your side arm to finish the job.

Your presence inspires bravery and flair in your allies.