Skip to content
Home / Delve into the Depths in the Kobold Blog / The Enlightened Necromancer: 13th Age Compatible 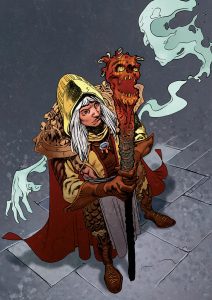 The Expanded White Necromancer is now available for Pathfinder Roleplaying Game! A lot of 13th Age fans have also expressed interest in a compatible skull-slinging PC class, so we asked Lawrence Augustine R. Mingoa of Persuasions of the 13th Kind to share some tips on an ARCHMAGE Engine conversion.

The Ghoul Emperor and other undead horrors are widely considered the greatest enemy of every living creature: their very nature violates the natural order of life. But a few spellcasters realize that the living may learn secrets from them that even the Exarch would envy: the secrets of true necromancy, of life, death and undeath.

These “white necromancers” embrace both the dark and the light of necromancy, and use their art to maintain and defend life. Here are some ways to bring the Expanded White Necromancer class into your 13th Age RPG campaign.

The White Necromancer Wizard
The simplest method is to pick the wizard class, take Vance’s Polysyllabic Verbalization as one of your class talents, and rename every spell in your spellbook to fit the “necromancer” theme.

Once that’s done, the “white” part of the white necromancer would come from either positive relationships with “heroic” Icons, or spending at least one negative relationship point with an Icon such as the Emperor of the Ghouls. Whenever you cast rituals involving communing or raising dead, you take a diplomatic approach to handling the spirits of the dead as opposed to a brute-force method. As an option, use Charisma instead of Intelligence for your spells’ attack rolls.

The White Necromancer Sorcerer
Another method is to pick the sorcerer class, take Undead Remnant Heritage as one of your class talents, take Ritual Caster as one of your feats early on, and modify (either in name or in mechanics) each spell in your known spells to fit the “necromancer” theme. As with the wizard above, the “white” portion would come from your Icon relationships, as well as role-playing.

Necromantic Magic
Summoning spirits and creating undead could be done through ritual casting, as agreed upon with the Game Master. The GM might allow you to have a small army of undead mooks, or a powerful lone undead giant–though probably not both. Either would likely require you to find the bones and components needed to create these undead servants.

If the above methods don’t accomplish what you want for your enlightened necromancer, you can work with the GM to create your own class talents. Here’s a Divine Heritage talent for sorcerers, and Necromancy for wizards.

Sorcerer Talent: Divine Heritage
You can replace one of your sorcerer spells with a cleric spell of your level or lower. You can also include positive energy damage on your personal random energy damage type table, swapping out an energy type that you don’t want to access randomly.

Adventurer Feat: You gain the heal spell as found in the cleric class feature, but can only cast it twice per day. Once per battle, you can choose to spend a recovery as a free action to regain one use of your heal spell.

Champion Feat: Whenever you roll a 1 or a 2 on your Gather Power ability, you or one nearby ally gains a +1 to their next death save and last gasp save before the start of your next turn. Whenever you roll a 3-6, creatures normally damaged by your Gather Power ability are stuck until the start of your next turn.

Epic Feat: You gain the turn undead spell as a bonus spell. If you already replaced one of your sorcerer spells with it, you can use turn undead on one living creature instead.

A. You gain the cleric’s heal spell, but can only use it once per battle. Twice per day, you can spend a recovery as a quick action to either regain the use of the heal spell, or transfer any “save ends” effect from an ally to yourself.

B. You gain a cleric spell of your level or lower as a bonus spell.

The GM may allow you to have a companion other than a zombified bear or a magically flying skeletal falcon, but may have to either make adjustments to your companion’s stats/features, or remove the extra recoveries granted to you by this talent (likely both) to accommodate the abilities of mummies, shadows, ghosts, vampires and other special types of undead.

Tips on Creating a Homebrew White Necromancer Class
For those who feel that a full class write-up is in order, the necromancer class for 13th Age will be made available to players in 13 True Ways.

If you want to create a homebrew necromancer class based on Kobold Press’ White Necromancer, keep in mind that one level in 13th Age is roughly two to three levels in other d20 RPGs. Also, instead of the normal “gain X feature at level Y” found in most d20 RPGs, you typically gain three class talents at first level, with feats designed to improve those talents and/or provide new options based on those talents. The result is similar to how archetypes work in Pathfinder Roleplaying Game.

Have your own ideas for a 13th Age White Necromancer? Leave a comment!