Skip to content
Home / Delve into the Depths in the Kobold Blog / The Courts of Fey: Seelie Knight 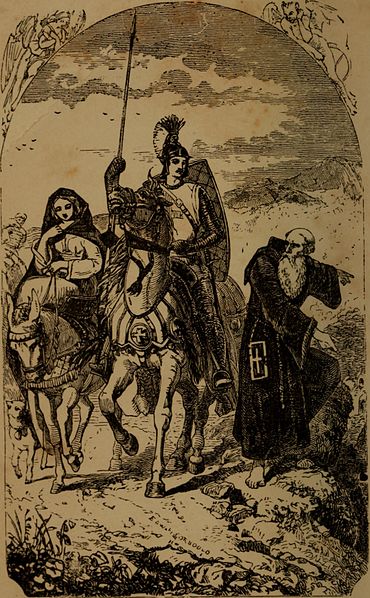 Defense of the downtrodden and protection of the weak, virtuousness and self-sacrifice, abstinence, charity, and humility—these things mean nothing to the Knights of the Seelie Court.

Valor and victory, courage and cleverness, glory, grace, and wit are the tenets upheld and understood by these shining and sumptuous sidhe. This and their fluid concepts of honor and justice have made them ever unlike any mortal counterpart. Whether abiding in dreaming kingdoms of their own or riding in summer service to the Seelie Court, the chivalry of the bright realms is represented largely by knighted nobles and landed gentry among the sidhe. Of these highborn fey, only the finest and most splendid in form and deed are chosen to join the Grande Cavalcades and transcendental tourneys, the heroic hunts and reckless revels of the Seelie Court.

She is Knight-Captain of Briarstone Keep, Marshal of the Moonscarred Road, and Warden of the southern Mistbriar. Lofty titles granted by a lofty lord, respectable titles of position and authority and responsibility… but not of glory. The Lady Urielle Snowthorn, once of House Glimmerwind, is now counted among the swordsworn of the Eastmarch—the elite order of sidhe knighthood that protects and oversees the Summerland’s mountainous, eastern frontier. Each of the Knights of the Eastmarch swear fealty and owe lands or title (for differing reasons) to the Alpine Prince, Lord Chelessfield, Marquis of the Eastward Marches and Lord-Protector of the Highland Reach.

It is no secret among whispering courtiers of the River Court and other gossips of the Summerlands that Lord Chelessfield desires the Lady Snowthorn for his consort, just as he once desired her ill-fated mother, the widow Yrshana Glimmerwind.

This might explain why Dame Urielle—who despite genteel birth, proven martial prowess, and years of dutiful service—is still quietly tucked-away in a rustic, frontier fasthold, far from the discerning eyes and silver tongues of more opulent and influential courts of the Summerlands. However, some discerning eyes search farther than others and some silver tongues ring cold and clear and seemingly without tarnish.

Magic Resistance. The Seelie Knight has advantage on saving throws against spells and other magical effects.

Spirit of the Summer Lands. The Seelie knight is immune to charm, paralysis and magical sleep, and has resistance to bludgeoning, piercing and slashing damage, from weapons that aren’t magical, silver or made of (cold-forged) iron.

Spellcasting. The Lady Snowthorn is a 13th-level spellcaster who uses Charisma as her spellcasting ability (DC 16 + 8 spell attack). She knows the following ranger spells:

Flicker and Fade (30 feet/day). As a standard action, a sidhe may “leap” between spaces as if by dimension door. This magical “flicker” must begin and end within 30 feet of some discernible light source. A sidhe can “jump” a total of 30 feet per day in 10-foot increments (that is, 3 x 10-foot leaps or 1 x 30-foot leap per day). Using this ability with a faerie mount brings the mount along as part of the movement.

Mantle of the Mist Lynx. A “gift,” from the Snow Queen, this cloak conjures up to 4 frostfire javelins per 24 hours and allows Urielle to cast fog cloud and gaseous form 1/day.

Moonthorn (Urielle’s Father’s Longsword +2). Melee Weapon Attack: +9 to hit, reach 5ft., one target. Hit: 12 (1d8 + 7), slashing, target and creature must succeed at a (DC14) Intelligence save to avoid lunacy, acquiring 1 random, short-term-madness. A target creature can only be affected by lunacy once per 24 hours. Constructs and undead are immune.

Staghorn Shield. Another “gift” from Lady Snowthorn’s new friend, this is a menacing buckler of interwoven stag antlers. If Urielle suffers melee damage from a target she can see, she may use her reaction to counterattack, forcing a successful (DC 13) Dexterity save to avoid being disarmed, taking 11 (3d6) piercing damage.

2 thoughts on “The Courts of Fey: Seelie Knight”