Skip to content
Home / Delve into the Depths in the Kobold Blog / Shops of Zobeck: The Lion’s Den 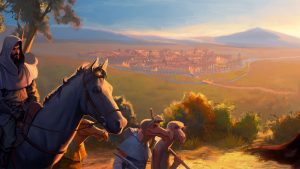 The world is full of adventure and intrigue, as well as those who seek both. These heroic few travel the world for glory, adventure, fame, and fortune. However, when they are not off saving the world or delving into dungeons and catacombs, they need a place to put up their feet and take off their boots. The Crossroads City offers such a place, a place of grandeur, a place where the newest of heroes along with the most experienced gather. Here they can find lodging, boast of adventures, find new ones, wager on fights in the Pit, and buy very expensive drinks. Welcome to the Lion’s Den!

Ground Floor Description: As soon as you open the doors, a deep husky voice rings out, “Hazzaah, another round of drinks for the lot of us!” Standing in the open maw of the Lion’s Den, warm air rushes past you, accompanied by the smell of meat, ale, and wood smoke. The noise inside is overwhelming; shouting, laughter, and music fill the room. Looking around, you see peoples of all races gathered into one large area, conversing with one another. Various objects hang from the walls: animal heads, different weapons of combat, paintings, and tapestries of epic heroes doing battle. To your right, there is a large wooden board nailed to the wall with scraps of parchment posted to it. Beyond that by a few feet is a stairwell leading down into the stage and fighting pit area. Directly opposite where you stand and left of the bar, a stairwell leads to the second floor.

Lower Floor Description: The lower level of the Lion’s Den contains the main attractions. This floor is 100 feet long by 100 feet wide and 12 feet high. Directly to the right of the stairwell is the kitchen, which is a large enclosed area; the smells of meats and breads emanate from it. Halfway down the left wall is a 20-foot-long stage set against it, round tables and chairs are set before it. Along the right wall is the famous fighting pit of the Den. It’s 30 feet in diameter and 10 feet deep, surrounded by wooden posts and connecting ropes. Encircling the pit are wooden benches stacked at different heights to facilitate many observers. The rest of the open space is filled with finely crafted wooden booths with leather seat coverings, square and round tables with high back leather chairs.

Second Floor Description: The stairs ascend to a landing which diverges into hallways before you and to your right. Each of them has multiple doors leading into rooms where patrons stay. At the end of the forward hallway are large double doors that lead into a suite, furnished with a double bed, dresser, armoire, stand-up mirror, desk, and chair. Behind the other doors are smaller rooms, each furnished with a single bed, dresser, armoire, desk, and chair.

Owner and Barkeep: Murt Bartoq is a middle-aged human man. His long black hair is pulled back into a ponytail tight against his scalp. He is wearing a dark green shirt with a brown apron and black pants. He has an enjoyable demeanor and loves to make friends with all of his patrons the best he can. Murt does not tolerate violence among patrons; he has them tossed in the fighting pit.

Pit Fighting Bookie: Arlan Bartoq (Murt’s Brother) is only a couple years younger than Murt. He is of average height and slightly overweight. He wears a bowler hat on top of his balding head. His black and grey suit is slightly worn along with his brown leather shoes.

Jobs Board: This is used to post all sorts of jobs, including those beyond the gates of Zobeck.

Adventure Hooks: The PCs overhear a couple of adventurous-looking men talking about an old mausoleum protruding from a cliff face on the eastern side of the Ironcrags.

GM Notes: Murt purchases all of his products from other expensive establishments. The current pitfighting champion is a human barbarian named Tormok Legbreaker.

Many frequent the Lion’s Den. It is a great place for PCs to find quests, get into a bar fight, join in the band, or make wagers on pit fighting.