Slip Through the Shadows! 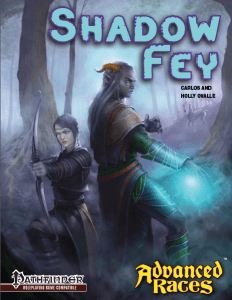 Refined and ruthless, the shadow fey are masters of the Plane of Shadows, and that dark land’s code governs their magic, their plots, and their clearly superior view of things. Best never to cross them, for their memories are centuries long.

With powerful shadow magic, a peculiar mastery of time and distance, and obscure codes for dueling and courtship, the shadow fey are maddeningly difficult for others to confront, let alone defeat. But among themselves, they are a friendly crew, and those they consider friends find them strangely loyal and fiercely protective of their sworn companions.

Advanced Races: Shadow Fey gives you everything you need to play a shadow fey adventurer. This 19-page sourcebook by Carlos and Holly Ovalle includes:

Hone your dueling blade, prepare a cutting quip, and make your enemies rue they day they met you. You are a dashing scion of the Shadow Courts, and no one stands your equal!

Pick up Advanced Races: Shadow Fey today, and define your own path of ruthless superiority in your next game!