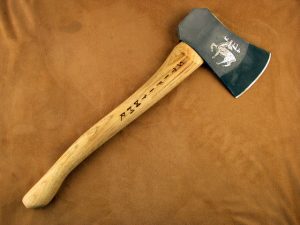 The Mammen axe is known from a single example found in a grave at Mammen, Denmark, and it dates from about 970-971 CE. The axe is very well made and inlaid with silver, and it was probably ceremonial and purpose-made to be buried with its rich and powerful owner, likely a Viking Jarl.

The client for this commission wanted a Mammen-like axe, but wanted to be able to use it for camp chores. Inlay is easily torn out and is usually reserved for ceremonial or art pieces. After some discussion we decided on the design and even included an etching based on art provided by the client. We also decided that I’d use an antique axe head that I already had on hand.

To get the antique axe head into a more Mammen-like shape required a considerable amount of grinding, so the safest bet was to normalize and anneal it first. I reground the edge to reverse the sweep so that the edge sweeps up (similar to some francisca) rather than down, as well as some substantial reshaping on the poll (the back of an axe head is also called a poll, or butt). When the shape was as close to a Mammen as I could get while retaining the functionality of a working axe, I hardened and tempered it. Heat treating antique steel can be tricky, because you don’t know exactly what it is or what its properties are. This one is old enough that I could be reasonably sure that it’s a 10 series steel in the mid carbon range, or maybe 5160, which heat treats similarly and is also mid carbon. The hardening was successful, and I tempered it for two cycles at 600° F, yielding a Rockwell hardness of ~52-54 on the C scale—a good place for an axe to be.

When I cleaned it up on the belt grinder, it seemed a hamon had formed during hardening. This would have confirmed that it was 10 series steel (and not 5160), but it also introduced some new design possibilities. Etching revealed that what I was seeing was not a hamon, but rather a tool steel bit forge welded into an iron body. You can see in the pictures that the bit etched darker; a sure indication of higher carbon content when compared to the body, and the body shows striations and layering; showing it’s made of iron.

One of the elements the client wanted was etched designs. He provided a stag, found in the Seattle Art Museum, and I found a traditional Norse raven. I printed the patterns on acetate film, cut them out, and used red enamel paint to create masks on the axe head. When the paint dried, I deep etched the piece. When the paint was removed, it revealed a stag and raven that stand several thousandths proud of the surface and untouched by the etchant, leaving them bright. I enhanced the etchings with some engraving, and inlaid copper and brass eyes in the stag and raven. The stag has a copper eye with a brass pupil, and the raven has a copper eye with an open pupil. The location and size of the inlay should protect them during use.

I was lucky to find a commercially made hickory handle that has perfectly straight grain and required only a little adjustment to fit the head. It’s affixed in the traditional way, with wedges. An axe handle can sometimes need to be replaced, so I didn’t want to put too much time and effort into embellishments, but sanding, wood burning, scorching, and oiling seemed appropriate.

The Runes… and the Name

This is a working axe. An axe can be a life saver on a trek; clearing brush, cutting firewood, building shelter, and protection. Pathfinder seemed an appropriate name and, because it helps you find your way home in dark times, it is Pathfinder in the Darkness, or “Stifinder I Mørket”, which is what the runes say in Danish.

To be safely stowed, a sharp axe must have a sturdy sheath. This one is made from cow leather and is dyed, oiled, held together with copper rivets, and has a Sam Brown stud closure. The rune is Othala, Odin’s rune, and the symbol of family and home. An excellent choice for this axe.

It’s not often I can talk about a client—even who they are. This time is an exception. Pathfinder was made for our Kobold King, Wolfgang Baur.

Wolfgang, may you use it in good health and may it protect and serve you and your family when called upon.

For the first time in a long time I’m in a regular game. I love it. It’s given me more drive to make more Real Steel, and so more are on the way. It’s a brutally cold and snowy winter here in the northeast, so video will be difficult, but I have a plan to do some in my shop. Please be patient and I’ll figure it out.

Coming soon will be a cutlass and a falchion.