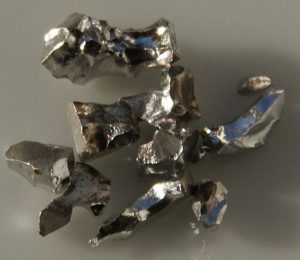 Recently, Wolfgang and I were exchanging emails, chasing down a few ideas for some Real Steel. One of the things we discussed was fantasy metals, and then he said this: “Or maybe elven chain is really titanium?”

This is something I’ve often thought about, so I knew right away fantasy metals were going to find their way into Real Steel.

Could Mithril be Titanium?

Let’s start by talking about titanium. A question that is often asked at bladesmithing events, and usually by those with a new interest in the craft, is “why not make knives/swords/blades out of titanium, since it’s better than steel?”

The question is always answered by an accomplished smith with a solid background in blade metallurgy and/or blade history, and always goes something like this:

Titanium is very different than steel, and it does some things better than steel. Titanium is very tough. Tougher than steel. But it’s not capable of the same toughness and hardness combination that steel is capable of. That steel can be heat treated to the desired hardness/toughness combination needed for a particular job makes it the best choice for blades, except in some very specialized situations, none of which have anything to do with “normal use” blades.

Titanium wasn’t discovered on our timeline until 1791 CE, and practical applications for it weren’t developed until sometime much later.

For our purposes here, the most important characteristic it has is its toughness. Although it was discovered too late to be used in pre-firearms armor, it is used in modern armor. The US Air Force A-10 Thunderbolt, better known as the Warthog, contains a 1,200-lb. titanium “bathtub” to protect the pilot and electronic systems.

Another important characteristic is memory. Some alloys of titanium “remember” their shape and can return to that shape after being forcefully deformed.

Reality often has elements that are just as cool as fantasy.

What about Adamantine and Sky Metals?

My first thought when I heard about sky metals was iridium. Iridium is the second densest element known (when using some calculations, it’s the most dense), and it is hypothesized to have been deposited on earth by an asteroid. I’m not certain, but there’s a good chance that the whole idea of fantasy sky metals grew from iridium. Iridium is found in the densest concentrations at the Cretaceous–Paleogene (K–Pg) boundary. I think it would be interesting to attribute various sky metals, each with unique properties, to various impact events.

I think there are two major considerations in creating fantasy metals. The first, and most important to backstory, is the origin of the metal. Is it naturally occurring? If it is, how did it get there? Are its properties inherent to the element(s) it’s made of, or was it affected by its environment?

If the metal isn’t naturally occurring, how was it created? By magic, or by the application of mundane or extraordinary physics and/or chemistry?

The second consideration, and the most important for gameplay, is the metal’s properties. Can it bypass AC and/or DR due to a magical or physical property? Is it very light, and therefore very fast, or is very dense and tough, and therefore unbreakable? Do its properties change under certain circumstances? Does it interact with its wearer or environment in a way that can create benefits, or perhaps, sometimes, deficits.

I encourage GMs and players to come up with new ideas for new substances and items made from them. It’s all well and good to use what’s in a published module, but I always think it adds fun when there’s an element of homebrew added to a game.

I’ve deliberately left this somewhat vague. I’d rather drop a kernel and have you take it from there. Think about your options. Use reality to seed and influence your creativity, but don’t be constrained by it.

Keep it new. Keep it fun!