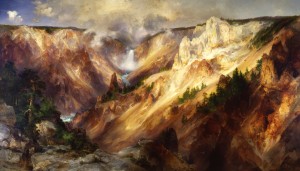 So your players went off on a tangent…

We’ve all been there. Sometimes it’s unavoidable; you’re staring at ten single-spaced pages of adventure you wrote last week and your party just walked… right… by. Prepared! offers you solutions to player tangents while you figure out your next move.

Unexpected traveling can be a stressful situation for a GM to facilitate. You want to provide your players with something more than: “It takes about four hours to get there. It…uh…rains a little.” Below are four snappy scenarios that can be used when your party engages in a little impromptu road wandering.

Who They Are: Tamby and Godgerman’s traveling circus was destined to fail. The party encounters a small remnant of the circus as this group travels to a nearby civilized center to sell circus gear and find new work. These sad folk have two horse-drawn wagon cages full of nearly dead animals.

What They Want: To reach civilization and forget the whole awful experience. Information on the road ahead would be welcome.

Plot Hook: The circus was disbanded when trained giant spiders turned on the ringmaster. The disbanded circus workers fear the spiders have been stalking them…

Who They Are: Sania, Emel, and Rofro are three hard-working well diggers. They are returning from a difficult dig on a local farm where they were unknowingly poisoned by some infernal mushroom. The trio are feverish and glowing a faint green color. They carry their tools and a sack full of the offending fungus.

What They Want: The three workers want to go home. The spores want to infect the party.

Plot Hook: A party member becomes infected by the spores.

Who They Are: Led by Sir Eastbridge, six nobles from a nearby civilized center are embarking on a “tour of the wilds.” Eastbridge and his lot are out to have a rough time of it on purpose. They are vastly underprepared for the reality of the wilderness, and they present flawed and romanticized depictions of surviving outside the safety of walls.

What They Want: To feel they are getting an authentic wilderness survival experience.

General Disposition Toward Strangers: Enthusiastic over-sharers with a penchant for bragging.

Plot Hook: The noble survivalists plan to spend a night near some local ruins. They lead the party to ruins but retreat at the smallest sign of danger.

Who They Are: Old man Henki doesn’t have much left in this world. Earlier today he still had his dog, Liz. Liz disappeared from Henki’s farm and now the old man is out looking for her. He carries a very heavy walking stick.

What They Want: To find that damnable hound.

Plot Hook: Liz is barking loudly from a cave nearby. Old man Henki’s hearing is too far gone to notice. The cave is home to a very large bear…