Skip to content
Home / Delve into the Depths in the Kobold Blog / Plaza of Dark Delights: Potent Poisons and Forbidden Fruits 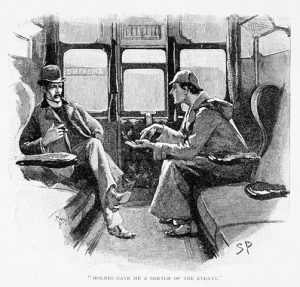 “I suppose that its influence is physically a bad one. I find it, however, so transcendentally stimulating and clarifying to the mind that its secondary action is a matter of small moment.” —Sherlock Holmes, The Sign of Four

From the early exploits of Sir Arthur Conan Doyle’s great detective to the two-fisted tales of Robert E. Howard’s Hyborian Age, pulp fiction is no stranger to the seductive nature of illicit substances and their traffic. Howard’s Stygian sorcerers are somewhat synonymous with the “slumber of the black lotus,” and no crime thriller worth a dime would be missing that trademark undercurrent of heroin noir.

Since I’ve been exploring the impact of classic pulp fantasy on roleplaying—with Howard’s writing in particular—I find it only fitting to shine a light on the decadent side of the Hyborian underworld. Taking inspiration from Conan and Cthulhu mythos stories (as well as real-world substances somewhat appropriate to the time and space), I set out to supplement the Pathfinder RPG with some devious drugs and puissant poisons of the pulp era to keep a pervasive sense of corruption close at hand.

It’s worth noting: the relative low cost of drugs in Pathfinder is offset by their addictive and damaging side effects. Should you find one of these illicit substances unbalanced in the hands of your PCs or NPCs, please adjust costs or severity to suit the story and pace of your own campaign. (No drug in the Pathfinder Reference Document exceeds 500 gp in cost, and I wasn’t going to be the one to start breaking the bank).

So here’s an attempt to add some context to those drug-induced nightmares of demon-haunted realms from the pages of our favorite pulp stories. Simply put, these are items one could expect to find on the Stygian black market—for a handsome (and often harrowing) price. And I’ll spare you a grand treatise on the ethical concerns of drugs and substance abuse in tabletop roleplaying; but I will advise you to respect your fellow players and always remember: there’s a fine line between ripe and rotten.

Notes The pollen of the black lotus creates death-like sleep and monstrous dreams. It is said that the grisly wizards of the Black Ring voluntarily seek the scarlet nightmares of the black lotus to revive their necromantic powers.

Notes Legends say the instructions for this sacred brew came directly from plant spirits and the plants themselves. This potent admixture of ‘Spirit Vine’ and other psychoactive jungle plants is utilized by shamans and truth-seekers alike for its divinatory purposes. Vomiting can follow ingestion, which many shamans consider to be a vital part of the experience. The spirit vine decoction is said to penetrate the veil between worlds.

Effect 5% chance to become confused if user is addicted

Notes ‘Sweet Leaf’ is a sardonic moniker for this narcotic wasteland weed. Toxic and highly addictive, the grassy sweet leaf is eaten by those too impatient to smoke it (or too addicted to bother). Addicts reek of the leaf’s sweet stench and can be identified by their green-stained mouths and demon-haunted eyes.

Notes ‘Wavy Caps’ is the colloquial name for a rare species of psychotropic mushroom. Wavy Caps grow on raw compost and plant material, and are traditionally found in regions lush with temperate woodlands. Fruiting is dependent on a drop in temperature and typically occurs during autumn months, when savvy foragers can turn a princely profit.

Notes Although black lotus pollen is coveted by Hyborian sorcerers for its necromantic properties, the refined blossoms of the Stygian black lotus strike dead any who taste or smell of them.

Notes This darkly purple juice is harvested from a fruit the people of Kush call the Apples of Derketa, named after their Queen of the Dead. A small drink of the juice or its touch upon flesh spells a painful death.

Notes The Stygian fat-tailed scorpion brings instant death to those who feel the terror of its toxic sting, making this remarkable venom a valued treasure among contract killers.

Notes Of all the underworld’s denizens, burglars and sneak thieves in particular hold the unique properties of night scorpion venom in high esteem. Though uncommon, it isn’t all too hard to find.

Notes The swamp adder—sometimes known as the “speckled band”—is native to the marshes of Vendhya and is simultaneously feared and prized for this potent paralytic venom.

Frequency 1/round for 6 rounds

Notes This viscous green venom is harvested from the giant Zingaran viper, the most lethal serpent from the fiend-haunted swamps of its namesake.