Skip to content
Home / Delve into the Depths in the Kobold Blog / Out of the Frying Pan: Weaving Words, Silk, and Steel

The port of Methony is as much citadel as settlement. Densely populated, stoutly walled, and high-towered Methony is a bustling international shipping hub and home to substantial naval fortifications. 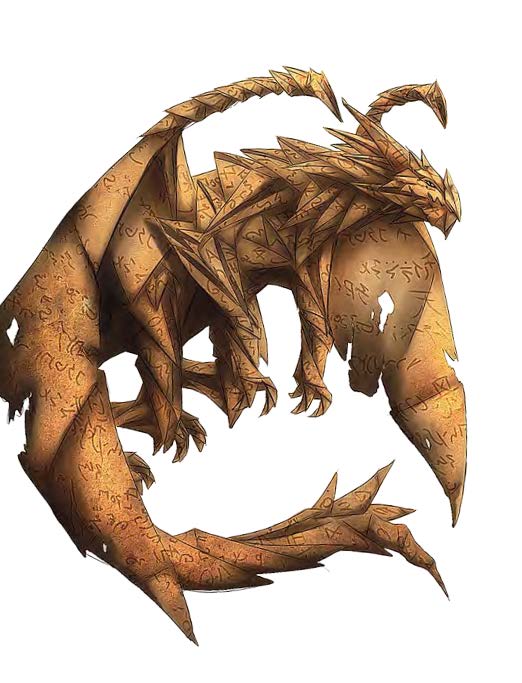 Wandering the streets of Methony, PCs might be compelled to enter Thalavar’s Rare Books, Scriptoria, and Scribe Shop. A character might have financial, travel, or legal documents in need of copying, authenticating, or notarizing. Or they may wish to buy or sell scrolls or maps, rare books, or esoteric writings. Perhaps they’re simply lost and seek directions.

The interior is long (60 feet) and crowded with mismanaged bookcases, scroll racks, and shelves of ink pots and pigments, quills, blotters, and charcoals. Disorderly stacks of books, tied sheaves and reams of paper, vellum, and parchments crowd and spill out from piled, dusty corners. Immediately upon entering, you hear, “Welcome, welcome noble folks! How may I enrich your day?” You see the proprietor already moving, having seemingly anticipated your entrance. He now strides keenly toward you, his demeanor friendly but rushed, almost overeager, and his warm smile seems to harden some, becoming more lascivious as he draws nearer…

Allow PCs to make a DC 12 Wisdom (Insight) check; success indicates a PC cannot be surprised by Thalavar’s first “helper.” After all the PCs have entered, Melianthus (cult fanatic) shrieks wildly, “Remember, we need two of them ALIVE!” Then the shop door slams, and Thalavar unleashes his paper golem swarm (see Creature Codex) and attacks. The wild-eyed shopkeeper becomes quickly unnerved by the PCs’ prowess, and at some point after round one of combat ends (GM’s discretion), Thalavar (if alive) quaffs a potion of invisibility and bolts toward the building’s far end, his voice again shrieking, “Blotch, help! Help me, and I release you from your contract! I am undone. They are too strong. Let me through!” The door can be seen (or heard) quickly opening and closing.

PCs pursuing Thalavar or approaching within 20 feet of the workshop door must succeed on a DC 14 Wisdom (Perception) check or be surprised by the scrivener’s second wave of “bodyguards.” Two paper drakes (see Tome of Beasts) silently unfold themselves from atop bookcases and rise to the attack while five map mimics (see Tome of Beasts) begin flying off the shelves from either side.

Developments. PCs winning through and advancing to the workroom door proceed to Encounter 2. PCs opting against continuing may loot the meager cashbox and perhaps find a valued document or low-level scroll and Thalavar’s unused potion if he’s dead. Otherwise, waiting for a short rest or leaving and returning even within the hour (with or without authorities), they will find Thalavar’s shop utterly bare of anyone or anything interesting except the secret cellar (see Encounter 3), the walls of which radiate traces of powerful void magic if detected.

Characters succeeding on a DC 12 Wisdom (Perception) check hear harried sounds of papers shuffling and books slamming beyond the door. If Thalavar survives, muted sounds of two voices arguing are also overheard. Opening the door reveals a printing and inking room. A nearby desk area and bookkeeping space appears looted. Atop the desk, stooped and pale as parchment, Blotch the ink devil (see Tome of Beasts) stands leering. Gripped under one arm, the diminutive devil holds a stack of ledgers and documents. Its other hand clutches an inkwell. Across the room, kneeling amidst scattered papers and ledgers, the now mostly harmless, completely mad Thalavar weeps, raves, and pounds at a trapdoor. The ink devil will throw its inkwell, releasing ink guardian ooze (see Creature Codex) before casting spells. Thalavar behaves as if affected by confusion, his already weakened mind finally shattered after months of interaction with folk of Leng and the constant, mind-twisting, gaslighting “counsel” of his diabolical servant-turned-manipulator. 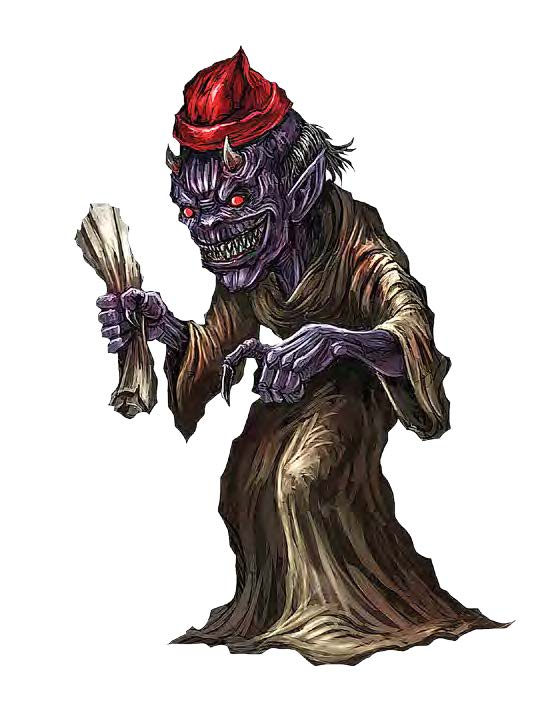 Blotch was overjoyed when diabolical superiors referred it to X’nog and G’nox, two folk of Leng brothers, career criminals currently seeking discreet workshop locations and distribution houses for their newest venture, Marean silk smuggling. Knowing such an otherworldly partnership would end swiftly in disaster for weak-minded Thalavar, Blotch gleefully finalized all arrangements. Blotch fights until Thalavar is slain. If Thalavar dies before reaching the workroom door, Blotch senses its freedom and gathers any documentation it can carry, releases its ink guardian ooze to await PCs, and teleports away.

Developments. Defeating the ooze, the ink devil (and possibly Thalavar) leaves PCs with the trapdoor and any ledgers and documents held by Blotch (failing his escape). A DC 14 Intelligence (Investigation) check locates Thalavar’s journal (see Developments) amid the confusion of papers and printing supplies. PCs now notice an eerie blue light leaking from around the trapdoor.

Those lurking below are aware of the PCs and cannot be surprised regardless of how stealthily the locked (DC 12) trapdoor is bypassed. Lifting the door prompts immediate attack from a Marean weaver (see Warlock #4), bursting through the portal and attempting to grapple a PC and drag them below.

Defeating the weaver affords a view to the cerulean-lit cellar 15 feet below. There, two folk of Leng (see Tome of Beasts) and three more (GM’s discretion) Marean weavers are seen hastily piling skeins of fine yarn, thread spools, and bolts of fabric near a strange device casting a sickly blue light throughout the chamber. The folk of Leng attack from range while the weavers skitter across ceilings and walls to engage PCs descending or attacking from above.

Developments. The folk of Leng flee (via etherealness) saving themselves and their device if any of the following occurs before 1 minute (10 rounds) of combat elapses:

If after 1 minute none of the above conditions are met, a blinding flash fills the room, incinerating any remaining Marean weavers and transporting the wicked Leng brothers, their device, and the pile of silken contraband to places unknown. PCs are briefly dazzled but otherwise unaffected. Searching the area uncovers little although a successful DC 16 Intelligence (Investigation) check reveals a Marean silk cloak (see Warlock #4) buried beneath a rubbish pile. 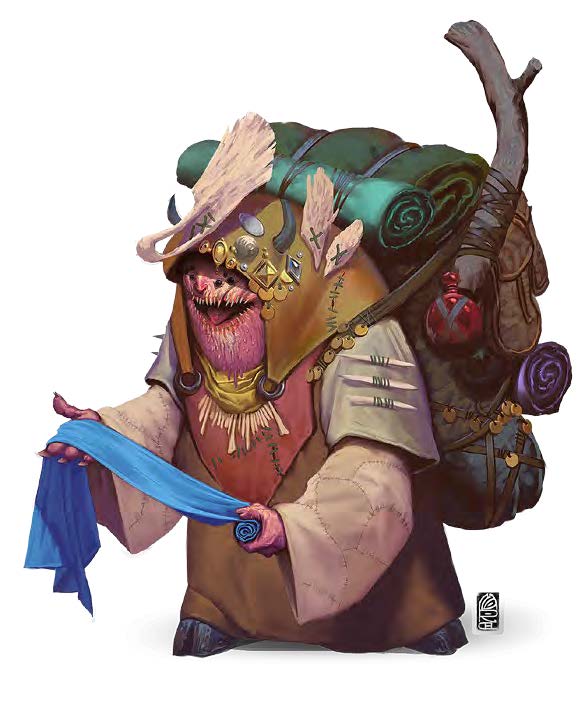 If PCs force the folk of Leng into early retreat or triumph utterly, they have captured the strange “hoard.” A successful DC 13 Intelligence (History) check reveals the pile of textiles before them contains highly valuable (GM’s determination) and highly dangerous contraband: Marean silk in both raw and refined stages. Silk that if found in possession of anyone of less than akinji rank is grounds for imprisonment and often execution throughout the empire.

Thalavar’s journal relates the summoning and binding of Blotch and later details Blotch’s introduction of their horrifying new “partners,” now paying the scribe handsomely and providing him authority over a menagerie of magical “pets.” Thalavar’s job was simple: maintain and expand his criminal network while regularly luring strays into his shop to keep the newly hatched weavers well fed. Meanwhile, the folk of Leng acquired raw silk through coercion, bribery, and blackmail of the few corruptible slaves, kobolds, and dragonkin within Mistras-Marea. Once transported, processed, and wound into skeins by Marean weavers (hatched from stolen eggs), the silks were smuggled out and off to black-market buyers in Kyprion, Capleon, and Zagora.

Blotch “handled” the operation’s bookkeeping, including contact lists, caravan and shipping schedules, and naval patrol routes, which if recovered (the bundle under its arm) and combined with the journal may be a haul even more dangerous and just as important than any stolen Marean silk.