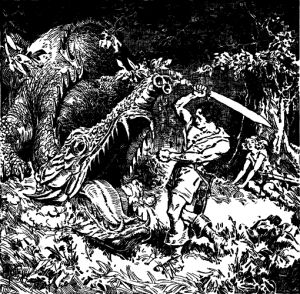 “My lands are where my dead lie buried.”—Crazy Horse

Tribal cultures sometimes have a different leader in war then when in peace. The tribal chieftain template I discussed last week was for a chieftain who mostly leads primarily by speaking. The tribal hero, or war chief if you prefer, leads by action.

You can represent this by simply applying the advanced template if you want fast, easy, and boring. If, instead, you’d like to challenge your players with a template designed for guerilla warfare tactics, join me after the jump for the tribal hero (CR +2).

We’ll start with statistics. A tribal hero needs to react quickly to danger, stealthily lead an ambush or night raid, and gracefully avoid damage, so let’s go with Dexterity +4. Planning is crucial—often tribal cultures are invaded by people with better technology, magic, or both, thus the hero needs to understand these advantages and counter with the strengths of the tribe. So, Intelligence +4. That said, sometimes being a hero is simply about being more powerful then your peers: +2 Hit Dice and +1 BAB.

The tribal hero is a feared figure and capable of great stealth and feats of athletic prowess. Add +6 to Intimidation, Stealth, and Acrobatics. Catching enemies or challengers is nearly as important as striking when an enemy is disadvantaged, so add +4 to Perception and Sense Motive.

Count Coup: When a tribal hero hits a target in his or her favored terrain or hits a favored enemy, he or she can elect to deal no damage and daze the target for 1 round (no save.)

Sacrificial Charge: For an additional –2 to AC, a charging tribal hero can deal double damage on a charge.

Equipment: Treat the tribal hero as a player character of the same level as his or her Hit Dice. If you want to limit the reward the PCs gain, make the majority of the treasures consumable (and consume them).

*Even if the tribal hero would not normally qualify.

**You can stack the bonuses on the same favored enemy if the tribe has only one traditional enemy.

As is my tradition, I’m taking orders for the crunch in the comment section. What monster would you like to see with the tribal hero template? Do you want to see it mixed with other templates such as the mutated, tribal chieftain, or advanced template? If I miss you before the comments get cut off, feel free to PM me on Paizo’s forums. My handle there is GM_Solspiral, and I’ll fulfill anything respectfully requested within a week of the article posting, with comments on the Kobold Press site receiving priority attention. I’m also taking nominations for a tribal encounter complete with all tribal templates at the end, so nominate your favorite monster races and what CR you’re interested in seeing. There will be a survey at the end of next week’s article.