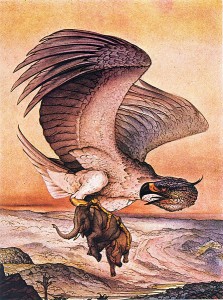 “When I bestride him, I soar, I am a hawk: he trots the air; the earth sings when he touches it; the basest horn of his hoof is more musical than the pipe of Hermes.”
― William Shakespeare, Henry V

Fantasy novels love a good cavalry charge, or a hero who fights alongside a wolf, or a potent mage who spies from the eyes of a soaring bird. In Pathfinder, the only class feature that trumps the animal companion or familiar is spellcasting. Having another creature in a player’s control enhances tactical options and widens that character’s arrays of abilities.

A war-trained horse alone can greatly enhance character movement, carrying capacity, attack options, and defenses. A horse can be a better companion than some fighters since it begins with three attacks, scent, an outstanding carrying capacity, and an excellent move speed.

This may come as no surprise to Kobold Press regulars, but I must confess: I’m a bit addicted to monsters. As a player, I gravitate toward options that give me a familiar, animal companion, or mount since I find the game is missing something for me without that option. I feel that I’m in good company since eight of the eleven base classes either outright gives an animal companion, mount, or familiar, or have options that allow you to take one. So, join me after the jump as we discuss the best options available for animal companions, familiars, and mounts, and keep your eyes peeled for more topics around our fanged and clawed allies, including some alternate rules.

The ape and axe beak are the best choices for a druid multiclass character paired with Boon Companion since both gain special abilities at 4th level. The ape has better statistics with regards to ability score, while the axe beak has better speed and the ability to serve as a mount that also trips enemies.

All the dinosaurs are relatively good, but many GMs are restrictive about using them. If you want similar bang for your buck with regards to statistics, size, and trample: the elephant works if dinos are restricted. Giant scorpions are also an attractive alternative if you were simply going for intimidation.

Dire bat, roc, and giant wasp make the list since all achieve Large size at 7th level, making them suitable mounts. Plus, they can fly. The dire bat has blind sense, and the roc is statistically best and can grab foes. The wasp has poison and can hover if the GM wants a bit of realism.

Big cat makes the list for pounce and rake, which is a very powerful combo with its normal stats. Wolves begin with improved trip, which makes them very viable for multiclassers or weaker melee druids and rangers. Crocs made the list because of their death roll and sprint ability, though I’d avoid them in dryer areas.

Worst Choice: The horse. Your special ability boost for the horse is combat training, which is something you can simply purchase or better yet train into your companion for free.

Medium: You get horse or camel; both are fine.

Arcane bond is a huge no brainer. You can either have a huge vulnerability or a scout that delivers touch spells and gives you about two feats.

Hawk and owl make the list because they are flying scouts that grant Perception bonuses. Parrot, raven, and thrush are good choices because, in addition to being flying scouts, they also can speak, which means they can deliver messages. You could also gain a bonus to Appraise, Linguistics, or Diplomacy, with the first two being in the wizard’s wheelhouse and the latter being the domain of the sorcerer. Rounding out the flyers is the rhamphorhynchus, which is a flying scout that grants you a +2 bonus to initiative—quite a potent combo.

Green sting scorpions are the best choice for those who don’t really want to keep track of their familiar and would just like something that hangs out in the character’s backpack. Basically it and the compsognathus are Alertness and Improved Initiative packages.

Weasel makes the list because of monster stealth and provides a bonus to a weak save. The fox aids Reflex as well, but it has scent, which is also useful. Skunk is a winner because it boosts your weakest likely save, and its debilitating spray attack targets touch Armor Class. The centipede on the list makes it because of its poison, mobility, and stealth bonus for the arcane trickster builds. Viper has abilities as a scout, a poison attack, and a Bluff bonus for the arcane trickster sorcerer build.

Swim doesn’t come up as often as the other choices. A bonus to the arcanist’s strong save is silly, and I’d really like to see an arcanist who wants to grapple. I suppose there might be a rare paladin build with the Eldritch Heritage feat that might appreciate the grapple bonus, but this is a stretch.

Did I miss something? Make your case in the comments, and I’ll be sure to respond. Next week, be on the look-out for alternate rules for animal item slots.