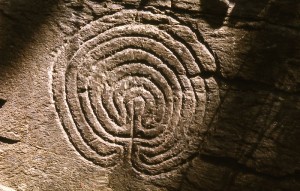 A civil service group, the Right Hand has the express goal of leading people to destinations—whether it’s personal development or literally getting to a particular goal of some kind, however twisted the path might be. Most members are Lawful Good, but may be up to one alignment away (or true neutral) and still function well within the society. While their skills are for hire, and many of them have wilderness survival talents, they shouldn’t be confused with mercenaries—they’re guides at heart and happy to remain that way.

A simple name for a not-so-simple collection of people, the Lost are individuals who have wandered away from their paths in life and found that they had nowhere to go. Extremely lawful, they eventually came together and decided on a purpose for themselves: to discover and inhabit ancient ruins where they can create for themselves a society where they will no longer feel apart. Prized skills include the ability to deal with traps of various kinds and explore dungeons on the theory that guarded areas are the most likely to have the knowledge (and structural stability) they seek.

Few people know how their name came about, but the Knotcutters are a boisterous, chaotic group whose main way of doing things is to smash straight through problems and get the reward at their end. Literally smashing, by the way, even if that means blowing a hole straight through the walls of a maze or something like that. Despite that, they’re surprisingly good explorers in their own right. They just don’t like wasting time on puzzles when they could be grabbing rewards instead. Adventuring groups have occasionally reported unexpected meetings with the Knotcutters when the crazy people smashed right into the middle of whatever was going on. It should be noted that they mostly try to avoid killing if they can help it, even if competing for a prize. They want treasure, not battle and bloodshed, and their fights are usually the kind where everyone cheerfully gets drunk together at the local pub afterward.

You know a great deal about, well, all sorts of things that come up on the walk of life . . . and thinking about matters for awhile often helps you recall things you forgot.

Benefit: Each day, for every 5 points in Knowledge that you possess, you may re-roll a failed Knowledge check.

You’ve explored a lot of dungeons in your life, and your sense for trouble is almost supernatural.

Benefit: Each day, for every three character levels you possess, you may choose to add 5 points to the result of a Perception check before you perform the check.

You are an expert at putting together scraps of information to help you find every last bit of loot.

Benefit: Before you leave an area, you may make a Knowledge check to try to recall what you know about the area. If successful, you recall a story about any treasure the party has not found within the area. The less treasure there is, the higher the difficulty check will be.