Skip to content
Home / Delve into the Depths in the Kobold Blog / Midgard Summer, Week 2 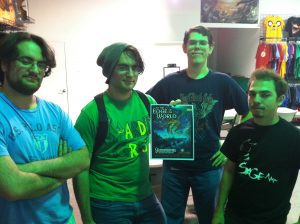 This report comes from Joe Cirino, who was in contact with Wolfgang recently regarding his Midgard Summer report. His whole group received copies of the Player’s Guide to the Seven Cities, which you can find at Paizo.com and DriveThru RPG.

Not too long ago, our group finished running To the Edge of the World. Now I really know what you meant when you said it was a crazy excursion! Most of the players in the group said the adventure had a very “high level” feel that they didn’t expect to get at level 2, and though some parts of the module itself were a little confusing, I put a lot of embellishment into the various parts and changed some things around to suit a party of sailors from the Seven Cities area.

I’m sharing a picture of us at Past Present Future Comics during our last game. We picked up another player named Mike on the last day of running To the Edge of the World as Adam had to leave early. They said the things they enjoyed the most about the adventure were the grand/epic scope of it, as well as the amazing transition from Midgard to space (one of our fighters began to mimic the Space Core from Portal 2 once we hit space). I gave the Book of Vael Turog a Rodney Dangerfield voice as well, which was a hit for our group and some people playing Warmachine 3 tables down, who all came over after their game to watch us play. All in all, it was a pretty fun experience, and everyone wants to continue playing the game past the end of the adventure. (I already set up a bit of a cliffhanger. When the party returns to Simez, they will find him murdered and their pay stolen with a note from an unknown aggressor.)

You can snag your own copy of To the Edge of the World at both Paizo.com and Drive-Thru RPG.