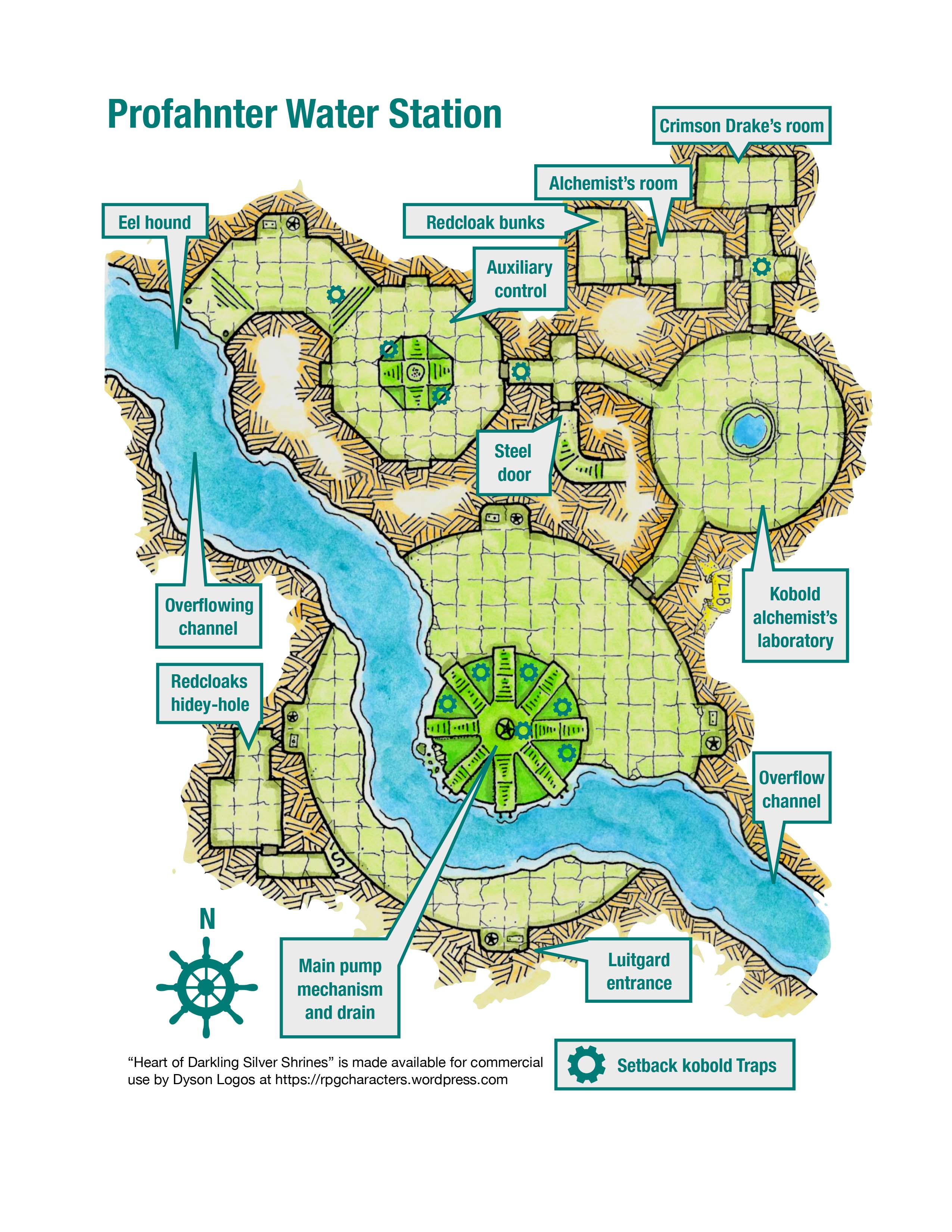 The verdigris plaque is barely a hand’s width wide, set into the door frame. Its raised letters have an antique flourish, an artful design from the days when the Trade Tongue alphabet resembled Dwarvish script. For a spot in the Cartways, such an embellishment is unheard of. It’s a wonder that someone hasn’t pried it loose and exchanged it for its worth in brass. It can still be read: Profahnter Water Station.

Ducking beneath the low-hanging threshold, the stone steps descend, the corridor turning right at each of three landings. The air is heavy and dank; rough-hewn walls seep.

Stairs make a final right turn, ending at a door. It is steel, set into the rock and reinforced with iron bands riveted into place. Black, lead-infused paint was applied to reduce corrosion. Even so, rust fans out from the lower left of the door in red and orange flakes. Blocky letters stamped into the door read: “W.S. PUMP 2.”

Location: Cartways, beneath the eastern section of Zobeck, adjacent to the River Argent.

Situation: Adventurers seeking to fix the source of the Cartways flooding find themselves interrupting an exchange between a kidnapper and a double-dealing cultist at the water station.

Lure: Sections of the Cartways are starting to flood, so said the rumor-mongering tavern clurichaun (see Tome of Beasts). More than one undercity denizen confirmed it. A few concerned “leading citizens,” those who find the Cartways useful, are pressing coins into the hands of adventurers willing to investigate. Black Market merchants slyly hint that the old pump station might be the place to look: “Keep your wits down there. The place is used for more than sideways trades. ‘They’ don’t like interlopers.”

Lore: House Profahnter was lower-ranked but influential among the ruling class of old Zobeck. It was tied by fealty to House Stross when the Cartways were being expanded and enhanced for all sorts of clandestine and enterprising purposes.

Lady Audra, the Profahnter matriarch, identified the potential for disaster after a single rainy season. As the River Argent swelled, the water spilled over its banks and flooded the surrounding pastures and many of the city’s low streets. All this water had to go somewhere, and the digging and tunneling had created, essentially, an uncontrolled storm sewer. Moreover, some of the excavating was getting nearer to the banks of the river. The entire underground complex could be flooded if the river ever punched through.

Though Lady Audra was mostly concerned with securing her own family’s holdings in the Cartways, she could not finance the remedy on her own. Her petition was eagerly received, and Stross gold financed what they often referred to as their “civic improvements project.” In the Cartways, Lady Audra ordered the construction of two water stations. They were connected by a brick-layered channel that would funnel storm water from the Stross section to the pump and drain at the Profahnter section. During the rainy season, the stations would act as a sump, taking the diverted water from the channel and pumping it back into the Argent.

Construction of the facilities took the better part of two years to complete. Lady Audra’s requirement that the work be done secretly and with exacting measure by dwarf engineers of the Ironcrags accounted for many delays.

Let’s make a deal: Saldie Luitgard is a city watch captain (see Tome of Beasts) who’s gone into business for herself. She’s tired of subsisting on a paltry guard’s wage, all the while knowing that “lowlifes” and “scoundrels” not half as smart as herself are getting rich in the Cartways.

Luitgard kidnapped a female mage, Tabea Wain, who had just created a floating pink gemstone — a still-bound emerald eye (see Tome of Beasts). Underworld contacts assured Luitgard that the Redcloaks gang would prove eager buyers, provided she could deliver the shackled mage and the eye to the pump station. Specific directions put her arrival in the southernmost portion of the station via a ladder from the level above. Luitgard handled Tabea roughly to make her compliant for the trip. Luitgard hired a pair of ratfolk rogues (see Tome of Beasts) as backup.

The dealbreaker: Siphoklexes, a kobold alchemist (see Tome of Beasts), maintains a laboratory in the pool room. He relies on the pool’s source of fresh water from the River Argent for his experiments. He is responsible for sabotaging the pump’s large wheel mechanism, commanding a swarm of clockwork beetles (see Tome of Beasts) to disrupt its normal operation. (Only by eliminating the clockwork beetles and adjusting the auxiliary controls can the pump’s normal operations resume.) His mechanical meddling allowed the channel to back up, making sure he had an ample supply of water for crafting chemical wonders for his masters in the Redcloaks gang. He made an alchemy jug adorned in kobold fetishes, his initial offering in the pending trade deal with Luitgard. 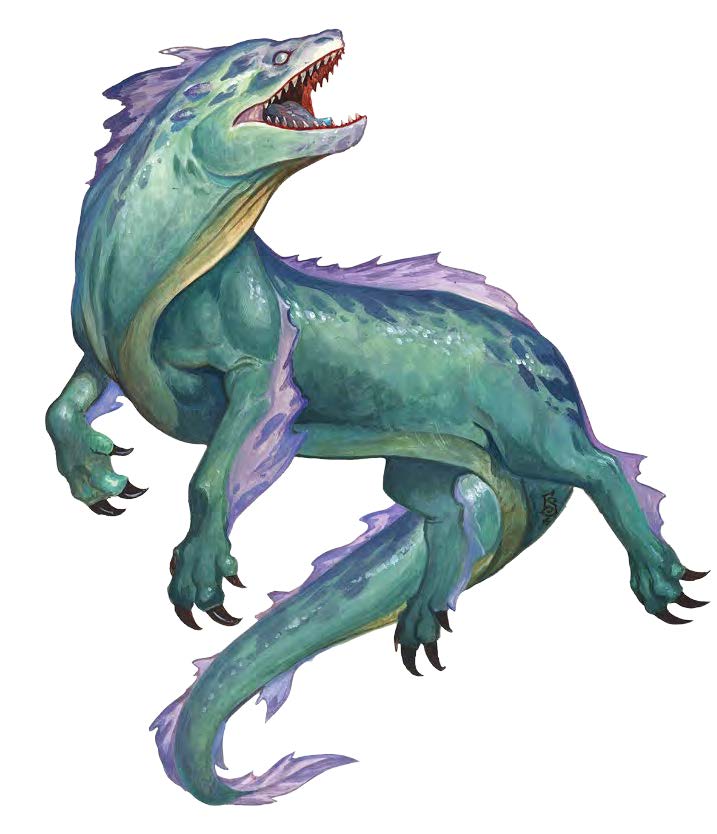 Siphoklexes also possesses a staff of the python, but he is reluctant to give it up. He might sweeten the pot by tossing in his ruby-adorned clasp, which is in the form of a red feather. The red feather is the symbol of the Redcloak’s fiendish patron Mammon. If Luitgard wears it, it’ll be the perfect tag should the kobold wish to send assassins after her later.

In any event, Siphoklexes hasn’t any gold coins, except for the handful that his pet crimson drake (see Tome of Beasts) Sizzle sleeps upon. Siphoklexes thinks of Sizzle as his pet; the drake does not, behaving with the same bored reluctance as a house cat.

If Luitgard insists on specie, she’s out of luck. If pressed to the point of irritation, Siphoklexes orders his handful of kobold minions to attack. They are hiding in a secret room, armed with slings and daggers and waiting the signal to surge forward. The kobolds are like-minded Redcloak gang members who have boobytrapped the main pump and the auxiliary control with setback traps.

Creatures: A hungry eel hound (see Tome of Beasts) has slipped into the flooded channel. An ambusher by nature, it likes to snag unsuspecting creatures that come to the water’s edge.