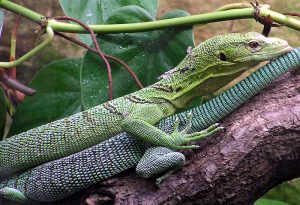 The patrons and designers have completed the first drafts of the The Lost City of Kadralhu patronage project, and now is a great time to jump on if you’re curious but haven’t yet signed up. This week, we present pages from Logan Bonner, Michael Furlanetto, Tracy Hurley, and Quinn Murphy.

Tomorrow, we’ll show you the section about the tainted plant Malsalix. Now, though, we present themes for the new oklu race.

Oklu all fit different roles as dictated by their caste. Within each caste are different groups, each with their own specific function and duties. To create oklu with various roles within each caste, use the appropriate statblock and then replace the default imprint ability with the desired power from this list…

The salaa caste is charged with defending society from without and within. Hunters are trained to forage and kill animals for the settlement. Assassins quietly dispatch unruly oma who make trouble. Last are soldiers, who police and defend the oklu communities.

Soldier, Tre-Salaa: Tre-salaa defend oklu to the limit of their ability. Even if defense takes the tre-salaa’s life, it is seen as a worthwhile sacrifice. The soldiers of oklu society also use their strength of arms to enforce laws and maintain peace when no external enemies threaten the settlement.

Trigger—A creature adjacent to the soldier hits with an attack.
Attack (Immediate Interrupt)—Melee 1 (the triggering creature); +15 vs. AC.
Hit—2d8+6 damage.

Trigger—An ally adjacent to the soldier is hit with an attack.
Effect (Immediate Interrupt)—The attack is resolved against the soldier instead.

Hunter, Gra-Salaa: Gra-salaa have the most dangerous position in oklu society. Hunters must confront the brutal, unpredictable world outside the northern and western walls in search of food for the settlement. The danger they confront dwindles their numbers each day, until few remain.

However, those few are hardened and deadly. The skill these oklu use every day to survive is overwhelming and fatal to their enemies.

GRA-SALAA IMPRINTS
[M] Imprint of Precision • At-Will
Trigger—An enemy or ally within 10 squares gains a bonus to an attack roll.
Effect (Immediate Reaction)—The hunter gains a +2 power bonus to attack rolls until the end of its next turn.

[M] Imprint of the Predator • At-Will
Trigger—A creature within 10 squares scores a critical hit.
Effect (Immediate Reaction)—Until the end of its next turn, the hunter’ next hit is an automatic critical hit.

Assassin, Que-salaa: Fewer in number than even the gra-salaa, the assassins of the oklu possess lethal arts and knowledge that place them outside normal oklu society.

There is very little for que-salaa to do unless some outsider has trespassed against the oklu. Otherwise, they typically are left to practice in their quarters. When time does come to use their services, however, it is impossible to turn them away from the target.

Que-salaa use the assassin statblock on page XX. Que-salaa skin is black, but few see this outside of the assassin’s training site. Assassins frequently take the color of another role within oklu society. Standard que-salaa names: Iden, Muden, Mudon, Tiden, Wedon, Loden.

Oklu within the iness caste form the backbone of the society in Kadralhu. The iness include the laborers (known as burdens), craftsmen, and merchants in oklu society. Iness use the burden statblock on page XX.

Burden, So-Iness: Seeing to repairs and physical labor required in Kadralhu are the so-iness, the “burdens” and laborers. With bigger frames than typical oklu, burdens are well adapted for the strenuous labor each day brings. There is too much work for the burdens to ever keep up with, which means the city is deteriorating at a pace just beyond the oklu ability to repair it.

Over time, this puts the viability of oklu existence into question, but to burdens, it matters not at all: they labor tirelessly regardless. So-iness skin is dark green. Typical so-iness names: Gremma, Jobi, Femma, Bodi, Mysh, Rodi.

Craftman, Ku-Iness: The burdens are the backs and legs of the oklu, and the ku-iness are the hands, working skillfully at forges or weaving fabrics. The many trades passed down and imprinted on these oklu keep them occupied through the majority of their days. Oklu use no currency, so they often trade products of their craft for other needed services or donate them for the common good. The ku-iness that the raw resources the burdens extract and put them to use by other oklu. The Ku-Iness hue is sea green.

KU-INESS IMPRINTS
Imprint of Skill
Trigger—An enemy within 10 squares of the craftsman makes a successful skill check.
Effect (Immediate Reaction)—The craftsman gains a +2 to all defenses until the end of its next turn.

Imprint of Talent
Trigger—an enemy within 10 squares uses an ability that is an encounter, daily, or has a recharge.
Effect (Immediate Reaction)—The craftsman gains a +4 power bonus to damage on its next attack until the end of its next turn.

Teachers, scholars, scientists, and advisors of the oklu people, the lothaa caste is devoted at once to the preservation of traditions and to the discovery of new information. It is with this group that any progress can be hoped for as scientists and sages explore and experiment, bringing new knowledge and information to the oklu communities. Those lothaa devoted to science in particular are devoted to progress and evolution of the oklu.

There are no sub-factions of lothaa; each member of this caste is responsible for learning and teaching multiple subject matters, so a lothaa’s role is more a matter of the individual’s abilities and knowledge. Lothaa skin is various shades of blue, adorned with sigils that represent the knowledge that oklu has mastered. Common lothaa names: Hivo, Thiir, Yoki, Goyu, Riyo, Cintu.

Imprint of Progress • Encounter
Trigger—An ally within 10 squares hits an enemy
Effect (Immediate Reaction)—The maester gains a +2 power bonus to attacks until the end of its next turn.