Skip to content
Home / Delve into the Depths in the Kobold Blog / Journeys to the West: Hazards and Havens 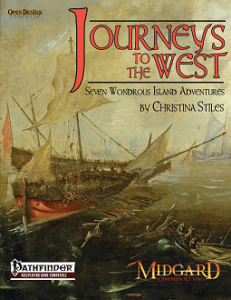 The patrons of Journeys have been hard at work brainstorming, collaborating, and creating material for an island-hopping expedition of legend. And with that comes not only the sort of item certain to save your hero’s hide as the ship sinks beneath storm-tossed seas, but the sort of creature locked within a giant brass monkey head, just begging for a greedy crew to unleash upon an unsuspecting officer corps.

With that in mind, the patrons of Journeys into the West are pleased to present the Island Survival Manual, which is sure to provide anyone who washes ashore with the barest form of subsistence. We also reveal the rum gremlins. These creatures can gleefully leave your crew in a state where the ship’s about to founder and your characters are about to need a copy of that Island Survival Manual.

So enjoy! And remember not to open any giant brass monkey heads!

This is a small, weather-beaten and dog-eared waterproof chapbook with ten chapters, each containing advice on particular aspects of survival in the islands:

Possessing the book provides the owner a +5 bonus to Survival checks. Additionally, the owner may activate one chapter each day. Effects targeting an individual affect the owner or an appropriate number of designated creatures within 10 ft. of the book. Once a chapter has been activated, treat the manual as a normal book for the rest of the day.

At the edge of the dock, a small, pot-bellied monstrosity stares at you, and its bright green hair is evident even in dim light.

SPECIAL ABILITIES
Drunkenness Aura (Su) A rum gremlin emanates an aura of drunkenness to a radius of 20 ft. All creatures inside the aura suffer the effects of the spell touch of gracelessness and must make a DC 12 Fortitude save to avoid being sickened for one hour. Creatures who have already been drinking take a –1 penalty to the save per drink.

These impish fey are only a foot tall and weigh ten pounds. Nonetheless, the nasty creatures are renowned for causing mischief far beyond their Tiny size. The pot-bellied rum gremlins have sickly green hair, orange eyes, and mouths filled with razor-sharp teeth.

Rum gremlins make their homes near the docks of seaside towns, and some stow away on ships. Each rum gremlin radiates a magic aura (see Drunkenness Aura, above) that causes drunkenness in any creatures in the area. Those affected find it difficult to stay on their feet and may become sick from the effect.

In addition to these auras, the little horrors have the ability to create distracting sounds and small traps. Rum gremlins use their abilities to prey on sailors and dockworkers, working in groups to swarm affected victims, who they drag into their lairs below docks or in the holds of ships. They also take great delight in the collateral damage their magic can wreak, frequently using it to cause distrust and disruption in the areas they inhabit before picking off isolated victims.

Rum gremlins are often found with rat swarms or dire rats they have trained to help protect their nests. The sound of bells drives rum gremlins into a rage, and they will go to great lengths to destroy the source of their torment.

Legends say the rum gremlins originated when Loki bet Ninkash that she couldn’t craft a brew potent enough to knock him out in a drinking contest. Ninkash won the contest, but a band of mites watching the contest made off with the remaining beer and transformed into the first rum gremlins.

13 thoughts on “Journeys to the West: Hazards and Havens”