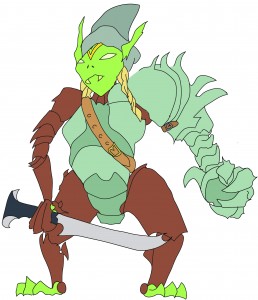 The gauntlet witch archetype first appeared in Kobold Quarterly #23, offering a vibrant alternate option for playing a witch. This article details the goblin racial variants of the gauntlet witch in Midgard.

Given the propensity for goblins in the Western Wastes to come by lost Ankeshel vril technology and the lore of gauntlet witches from Caelmarathi remnants, it was only a matter of time before the Wasteland gauntlet witch appeared. Combining fragments of Ankeshelian submission tridents, charged armor, and ferromagnetic gauntlets, then connecting the resultant heap to an extremely rare lesser vril battery resulted in something resembling a mutated cross between a clockwork arm, a harpoon gun, and inexpertly finished slag. Infusing the creation with goblin witchcraft and perhaps a dash of kobold-inspired tinkering produced the vril harness gauntlet—a highly dangerous and unstable artifact.

A wasteland gauntlet witch learns, prepares, and casts spells like a witch of equal level, except she stores her magic (derived as usual from a patron) within her vril harness-gauntlet and must meditate with it instead of communing with a familiar.

A vril harness-gauntlet has the armor statistics of a chain shirt and the weapon statistics of a spiked gauntlet. It weighs 15 lbs. Its associated lesser vril battery weighs an additional 5 lbs. and holds 30 charges—the discs of copper and orichalcum, as well as the solution, can be replaced at a cost of 700 gp.

Electric Grip (Su): At 3rd level, the wasteland gauntlet witch can make a melee touch attack against a single target. If the attack is successful, she can make a CMB check against the target’s CMD. If the check succeeds, the vril harness-gauntlet deals 1d6 electrical damage to one of the target’s limbs. Also, the target must make a Fortitude save (DC10 + 1/2 the vril gauntlet witch’s level + the Con modifier, rounded down) or be staggered for 1d6 rounds and the limb paralyzed for 1d6 rounds. If the save is successful, the target is staggered for 1 round and the limb paralyzed for 2 rounds. One use of this ability uses 1 charge.

Submission Harpoon (Su): At 5th level, the wasteland gauntlet witch can elect to fire a submission harpoon at creatures with a range increment of 10 ft. as a standard action. This is a ranged touch attack. If it hits a target, the harpoon deals 3d4 nonlethal damage and stuns for 1 round (Fortitude DC 16 + 1/2 wasteland gauntlet witch’s level halves damage and negates stun). Firing the submission harpoon, whether the attack is successful or not, consumes 1 charge.

Ferromagnetic Touch (Su): At 7th level, as a move action, the wasteland gauntlet witch can engage the vril harness-gauntlet’s magnetic charge. For every vril charge spent (maximum 3) the vril harness-gauntlet suffers a –1 penalty to AC and attack/damage rolls—this lasts for 2d4 rounds regardless of how many charges are spent. As a touch attack, this magnetic charge can be transferred to another creature wearing metallic armor or wielding metallic weapons, who then suffers the AC or attack/damage effects, or both (if wearing metallic armor and wielding metallic weapons).

Shock Pulse (Su): At 11th level, the wasteland gauntlet witch can operate the terrifying shock-pulse. Once every 3 rounds, as a move action, the witch can cause the vril harness-gauntlet to emit a pulse of electricity that affects all adjacent creatures, dealing 2d6 electricity damage and staggering them (Fortitude DC 16 + 1/2 the wasteland gauntlet witch’s level). Every use of this ability drains 2 charges from the lesser vril battery.

Unstable: Every time the wasteland gauntlet witch spends 2 or more charges in 1 round, the vril harness-gauntlet generates an unstable reaction in its briny alchemical solution. For every consecutive round that this reaction is sustained (in other words, spending 2 or more charges in consecutive rounds), there is a cumulative 5 percent chance that it will cause a meltdown in the lesser vril battery, instantly corroding the orichalcum and copper discs and dissipating any remaining charges. For every round between such expenditures, the chance of meltdown drops by 30 percent.