Skip to content
Home / Delve into the Depths in the Kobold Blog / Gnasty Gnolls: Vulturists in AGE 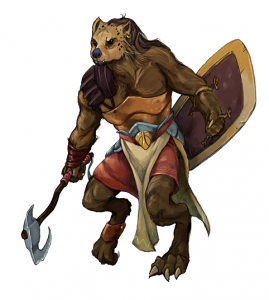 South of Siwal and deep in the Vulture’s Quarter exists a gnoll kingdom. This kingdom is ruled from a little-known city called Olum Kuleleri, where a gnoll said to be twice the size of any other sits upon a throne of bone. Olum Kuleleri is primarily subterranean, with vast natural and hewn Underdark levels housing armories, gnoll pup nurseries, slave barracks, and meat repositories that are guarded by trolls.

The desert city also has tall stone spires that rise from the desert floor. These spires are called Towers of Silence—Sessizlik Kulesi in Gnoll. Heated by the sun and infested with carrion crawlers, the towers are built and maintained by the tribe’s hordes of slaves, and they are comprised of three concentric layers: towers within towers.

The innermost nested tower holds the remains of prey as well as slaves that have outlived their usefulness, a catchment for bones and fluids that leech into the sand-filled rock foundations. The central nested tower contains slain tribe members that provide food to the residents of the outermost nested tower: vultures. The outer vulture aviary has openings that allow the flock in from the desert air.

These vultures circle above the city in black clouds that rise with thermals, usually providing the first indication of Olum Kuleleri’s presence in the area. They seem to hover over a desert lake, a deceptive mirage that draws those caught in the thirst of open desert. Due to the gnoll belief that consumption by vultures brings them through the Veil to the afterlife of the Fade, the avian scavengers are cared for by Olum Kuleleri’s Vulturists. These mages that raise and train a single vulture (convert a falcon) as a familiar, and can command the flock to scout and even attack. Vulturists have an affinity for the quarterstaff.

If you choose to play a Vulturist, modify your character as follows: