Skip to content
Home / Delve into the Depths in the Kobold Blog / Expanding Codex: Venom Elemental 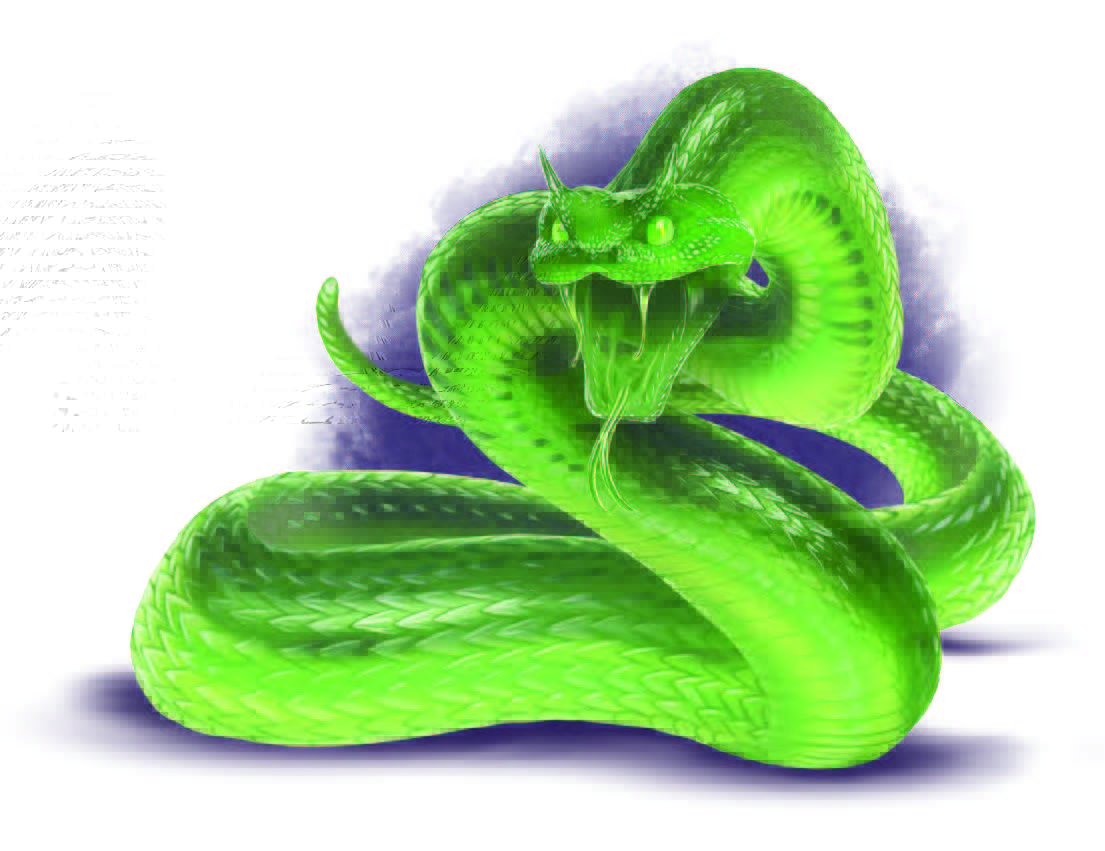 The following changes allow GMs to alter a venom elemental without modifying its challenge rating:

Air Form. Aerosolized versions of the venom elemental are rarer than their liquid cousins on the demiplane of poisons. The venom elemental can enter a hostile creature’s space and stop there. It can move through a space as narrow as 1 inch wide without squeezing. The elemental gains a flying speed of 60 feet.

Aerial Camouflage. While the elemental is flying it has advantage on Dexterity (Stealth) checks.

The venom elemental loses its swimming speed and its Liquid Form and Underwater Camouflage traits.

The venom elemental can grapple one Large creature or up to two Medium or smaller creatures at one time. At the start of the elemental’s turn, each target grappled by it takes 7 (2d6) poison damage and must succeed on a DC 13 Constitution saving throw or be poisoned until the end of its next turn. A creature within 5 feet of the elemental can pull a creature out of it by taking an action to make a DC 13 Strength check and succeeding.

Envenom Liquid. As an action, the venom elemental divests a portion of its body into a pint of liquid. The elemental’s hit point maximum is reduced by 1d6 hit points, and this reduction lasts until the elemental finishes a short rest. The venom retains its potency for 1 hour before dissolution. A creature drinking the envenomed liquid must make a DC 13 Constitution saving throw or take 7 (2d6) poison damage and gain the poisoned condition for 1 minute.

The venom elemental gains the Vulnerability to Antitoxin trait.

Vulnerability to Antitoxin. When the venom elemental is struck by a vial of antitoxin (thrown as an improvised weapon), it takes 2d6 acid damage. Additionally, until the end of its next turn, creatures gain resistance to poison damage dealt by the elemental and have advantage on Constitution saving throws to avoid becoming poisoned by the elemental.

Spit Venom. Ranged Weapon Attack: +5 to hit, range 15/30 ft., one target. Hit: The target must make a DC 13 Constitution saving throw, taking 14 (4d6) poison damage on a failed save or half as much on a successful one. On a failed save, the creature gains the poisoned condition until the end of its next turn.

The venom elemental modifies its Multiattack action to make two attacks: one with its bite and one with its spit venom.

The following magic item and spell are inspired by abilities possessed by a venom elemental:

If you do not already have a bite attack, these fangs allow you to use an action to attack a target with a bite that deals piercing damage with a +1 bonus to attack rolls and damage rolls and a damage die of 1d4.

While you wear the fangs, a successful DC 9 Dexterity (Sleight of Hand) checks conceals them from view. At the GM’s discretion, you have disadvantage on Charisma (Deception or Persuasion) checks against creatures that notice the fangs.

You can use an action to cause the fangs to fill with a green poison. The poison remains active for 1 minute or until you hit a creature with a bite attack. That creature must succeed on a DC 13 Constitution saving throw or take 1d10 poison damage and become poisoned until the end of its next turn. The fangs can’t be used this way again until the next dawn.

You transform a willing creature you touch, along with everything it’s wearing and carrying, into a fluid form for the duration. The spell ends if the creature drops to 0 hit points.

While the target is in this form, its walking speed becomes 10 feet, and it gains a swimming speed of 40 feet. The target can enter and occupy the space of another creature. The target has resistance to nonmagical damage. The target can pass through small holes, narrow openings, and even mere cracks. The target can breathe water and air. The target’s reach with melee weapon attacks increases by 5 feet.

While in fluid form, the target can only communicate in Aquan. It can manipulate objects, but any objects it was carrying or holding when the spell was cast can’t be dropped, used, or otherwise interacted with. The target can’t cast spells, and it has disadvantage with all weapon attacks except unarmed strikes. The target’s unarmed strikes deal bludgeoning damage equal to 1 + its Strength modifier, regardless of any other abilities that modify this damage.