Calling in the Cavalry: Mounted Mayhem in Paizo’s Pathfinder 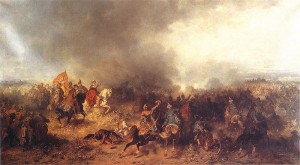 From the heavy horse of medieval Europe to the marauding Mongols that dominated Asia, cavalry has been one of the deadliest forces in the history of warfare. In order to bring this kind of combat to your Pathfinder Chronicles game, all it requires is building the proper mounted warrior.

There are certain inherent benefits to playing a mounted character. In no particular order those are:

For every benefit, there’s also a drawback. Before committing to playing a mounted character, players have to consider the following:

There’s no “right” way to build a character. That said, the best options you have for starting classes for a combat-related mounted character are as follows:

The paladin is the penultimate knight in shining armor. Any paladin can gain the services of an intelligent mount starting at level 5, but the shining knight variant (page 117 of the Advanced Player’s Handbook) allows you to negate the armor check penalty on your Ride checks beginning at 2nd level. That is perhaps the most advantageous ability of any mounted character.

The cavalier was born to be a mounted fighter. Cavaliers begin play with a mount that is intelligent, has Light Armor Proficiency and is combat trained. Cavaliers never take the armor check penalty on Ride checks.

Fighters make up for the lack of special abilities with bonus feats that make them deadlier adversaries. The Roughrider variant (page 106 of the Advanced Player’s Guide) takes away the armor check penalty for Ride by level 3. It doesn’t give you a special mount, but it does give you bonuses to riding in armor, and it gives you bonuses to attack and damage when fighting mounted started at 5th level.

Not to be outdone, the barbarians have a mounted variant as well. The Mounted Fury (page 79 of the Advanced Player’s Guide) gives you the Bestial Mount feature. It can be affected and benefited by your rage and rage powers. Ferocious Mount and Ferocious Trample (Advanced Player’s Guide, page 75) are mounted-barbarian specific powers that make for battlefield devastation.

There are certain feats that go into any mounted character’s build, regardless of which base class you choose.

Melee combat on a mount is defined by the ability to charge; it’s why a lance does double damage. Many of the feats you take will reflect this, but in general you want the following feat trees, listed below with page references.

For those who want to shoot on the run (keeping you mobile and out of reach), then, in addition to archery feats such as Point Blank Shot and Precise Shot, you should take the following:

There are some other things you should keep in mind when playing a mounted character that can help make your job easier. For instance: