Skip to content
Home / Delve into the Depths in the Kobold Blog / Buffalo Runners, Buffalo Callers (Part 1 of 2) 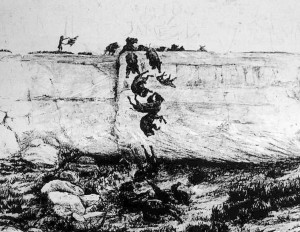 The horse was introduced to the Plains tribes from 1680–1750, giving rise to the horse culture on the plains, but for thousands of years prior, the tribes had lived on the plains and hunted buffalo in a very different fashion. The tribes of the Northern Plains—including the Assiniboine, Blackfeet, Gros Ventre, Crow, and Lakota—refer to this time period as the “Dog Days,” when the dog was the only beast of burden they had. The dog could not be ridden as a horse can, so all hunting took place on foot. As buffalo—or bison—were dangerous and hard to kill, the method used in hunting them consisted of luring a herd close to a cliff then stampeding them over. This was known as a buffalo jump, and the young men that lured the buffalo were called buffalo runners. Older men that performed ceremonies to draw the herds in were known as buffalo callers…

Occasionally, other types of animal might be lead to buffalo jumps, including pronghorn antelope, elk, deer, and bighorn sheep.

The Buffalo Runner: A Ranger Archetype

Favored Terrain (Ex): At 1st level, you may select a type of terrain from the favored terrains table (plains is usually the first one chosen). You gain a +2 bonus on initiative checks and on Knowledge (geography), Perception, Stealth, and Survival skill checks when you are in this terrain. When traveling through your favored terrain, you normally leave no trail and cannot be tracked (though you may leave a trail if you so choose).

At 5th level and every five levels thereafter (10th, 15th, and 20th level), you may select an additional favored terrain. In addition, at each such interval, the skill bonus and initiative bonus in any one favored terrain (including the one just selected, if so desired) increases by +2.

If a specific terrain falls into more than one category of favored terrain, your bonuses do not stack; you simply use whichever bonus is higher. This ability replaces favored enemy.

Favored Prey (Ex): At 3rd level, you select a creature type from the favored prey list (buffalo is almost always chosen first). You gain a +2 bonus on Bluff, Knowledge, Perception, Sense Motive, and Survival checks against creatures of the selected type. Likewise, you get a +2 bonus on attack and damage rolls against them. You may make Knowledge skill checks untrained when attempting to identify these creatures.

At 8th level and every five levels thereafter (13th and 18th levels), you may select an additional favored prey. In addition, at each such interval, the bonus against any one favored prey (including the one just selected, if so desired) increases by +2. This ability replaces favored terrain.