Skip to content
Home / Delve into the Depths in the Kobold Blog / Book Review: The Viceroy’s Monocle (The Storm Giants Trilogy, Vol. 2) 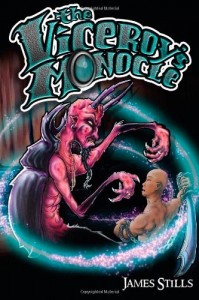 The Viceroy’s Monocle is the second book in a trilogy, and it serves as a good example of what can go wrong when you try to condense a really good and epic idea into a trilogy that will end up weighing in at fewer than 500 pages. I know that real world physical page space shouldn’t be a factor, because let’s face it—that is one of the reasons we love books so much. The movie can be only so long, but if the story doesn’t fit in one book, the author can just add a part two or three or twelve. Sadly, the Storm Giants Trilogy will end up being less successful than it should be for lack of page count to support the deep and rich story that Mr. Stills has conjured from his mind and gaming experiences.

To call this book a failure would do it a disservice. That said, it falls short in many aspects that make books successful. First and foremost, this book is hard to follow. So many epic things are going on with so many epic characters that I felt lost and confused at times as I was reading. Normally, when a book or series takes me to the lost and confused point, I simply walk away from it with no hard feelings. Something about The Viceroy’s Monocle (other than the fact that I was reviewing it) kept me reading. I’m going to start with the problems. Sadly a few went beyond the page count constraint.

First of all, naming conventions were distracting. Several of the characters had two or three naming conventions that were used at different times, and the mixing of those names with their titles added greatly to the maelstrom of confusion. Here is an example: There is a lich, who is the Lich of Malrone, who is also the wisest man of Eldrivaos, who in life was named Abra. So, is he the Lich of Malrone, the lich Abra, or the wisest man of Eldrivaos? Or should we just call him the A-man? Stills does a good job of trying to remind the reader of who exactly he is referring to during the story, but if he had let go of the complicated naming conventions, he wouldn’t have to use precious page space explaining this maze of names and titles.

Now, if you are not confused by all the names, titles, and nicknames, then the fact that some of the characters are possessed by demons will be the straw that breaks the camel’s back. There were times when two characters with multiple titles/names were stuck in the same body. So a single character with, say, five titles/names/nicknames was sharing the same mind/body with another character that had four names/titles/nicknames. So, if my math is correct, that is nine title/name/nicknames for two different characters sharing one body.

All the names, titles, and nicknames hint at the depth and breadth of this story and why the scant 181 page count becomes such a big issue. Characters in stories earn those titles and nicknames throughout their lives, and the glimpse we get into those characters is too brief to reach below the surface and get to know some interesting and intriguing characters.

The first 60 or 70 pages of this book have many things happening to lots of characters, with marginal transitions between them at best. Because of the short amount of page real estate, Mr. Stills seemed at times to be desperate to stuff as much backstory in as he could while still progressing the actual story. If the characters were shallow or I didn’t want to know them, then I would suggest that Mr. Stills simply leave out the backstory and get on with the fight scenes. As it stands, the characters are worth getting to know, but there just isn’t the page space for it in the current Storm Giants Trilogy configuration.

Mr. Stills has so many little things going right for him that I have not mentioned or have just alluded to. The first and most important is that he has an epic story that needs to be told. There is so much more to this story that I’m not getting as a reader that I want. This isn’t some run-of-the-mill dungeon crawl that is all brawl. This story is the kind of story that needs thousands of pages to tell, not fewer than 500. The characters, like the story, are interesting and definitely world changers. I care about what happens to them even if there were times I couldn’t follow what was happening to them.

One other area that Mr. Stills shines in is his descriptions of combat. In the real world, he is a martial artist, and his love and skills for those arts most martial stand out in this book. The combat is fast and brutal, and it conveys the sense of the “fog of war” that occurs not only during combat, but in its aftermath. The magic works the way any gamer would expect it to and Stills did well explaining not only its manifestation, but the feelings and observations of those who witness or are targeted by that magic.

If you can make it through the first part of this book, you should enjoy the end. Stills has many things to work on, but as a new author that is to be expected. When he can factor in the limited page space he has and weigh it against the depth of story he wants to tell, he will be just fine. I would love to see him write a hack-and-slash story that plays to his strengths in depicting combat with the written word so that he can finance a retelling of the Storm Giants Trilogy the way he intended to write it.

In closing, I recommend re-reading the first book in the series before starting this book. The first book is short, and reading it again might cut down on some of the initial confusion you might have when starting the second one.