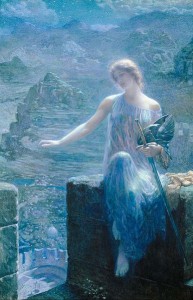 The Order of the Broken Rune

An organization that came into being soon after the capabilities of runic magic began to be revealed, the Broken Rune is a chaotic group of women who prefer the wild life to a sedate existence in the cities. Indeed, most of them were born far from any form of civilization (though the occasional member joins from more settled lands), out where they can worship the land, praise the sky, and enjoy the thrill of the hunt. This order’s members tend to be cheerfully violent, but respect displays of strength, and some travel the world to test their mettle. They are often visited by true Valkyries because of their way of life.

The Sisters of Selection

An order of highly religious women, the Sisters of Selection serve the same deity (or deities) that Valkyries on a particular world support. Aspiring to be something of a lower-level Valkyrie, the Sisters focus on training with both spear and spell (generally offensive magic, though minor supporting tricks are often added in) alongside education about warfare. Each full Sister has embarked on (and succeeded in) a quest to search for a worthy warrior and bring them back to a temple, where the warrior undergoes a ritual that will call a Valkyrie to their side when they die. Many Sisters spend most of their lives looking for such warriors, eventually retiring to one of their convents to train new recruits. The Sisters of Selection accept those of any alignment to serve as a follower of their deity.

To protect the innocent in battle is a difficult task, and even more so when one’s enemies seek to lay waste to the innocent, but the Shield-Bearers do this, and their training features an unusual blend of light (or no) armor alongside the use of Tower Shields that they’ve trained hard to carry around with ease . . . and sorcery to launch at enemies and keep them away. The Shield-Bearers rarely fight alone if it can be helped, instead traveling as a group to battlefields where innocents still need help. Few are so willing to risk themselves for others and to be fully inducted into the order. These maidens often set out to protect innocents on their own and truly experience the terror of being away from their companions before they return. Most are lawful good, but up to one step in alignment away is also permissible.

Battle Magic of the Valkyries and Shield Maiden Feats

When you succeed in any kind of competition or battle, the lingering feelings pump you up for more.

Benefit: If you roll a 20 in combat (or otherwise have a major success), you gain +1 bonus to your saving throws for the rest of that battle.

The Measure of Worth (General)

You have a keen eye for judging the value of other people.

Benefit: You gain +5 bonus to your Perception checks when using Perception on any intelligent being.

You are a true protector of the innocent and are always on the lookout for others trying to get through your defenses.

Benefit: Attacks of opportunity cannot be made against you.