Skip to content
Home / Delve into the Depths in the Kobold Blog / Bait & Switch: Trap or Monster? 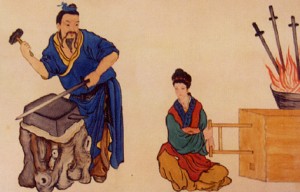 At first glance, it looks to be nothing more than a sword rack, masterfully carved from a single piece of dark wood, holding weapons in stylized arms. However, approaching the sword rack, it comes to life as its arms unfold to wield the sharp payload. It bounces menacingly towards you, flourishing the blades with an uncanny skill.

The master swordsrack is an example of a creature made through magical accident. The original was a simple animated piece of furniture made to protect a noble’s treasured magical weapon collection from thieves… For years it sat quietly in the kings practice room silently observing duelists and guards honing their skills through practice and repetition absorbing every valuable lesson into its wood. Unknown to all it was becoming a powerful swordsman on its own. This innate skill and ability wasn’t discovered until a group of thieves attempted to make away with the swords. With the bloodstains cleaned away, it was studied and replicated. No one knows where the original master swordsrack went but its successors have been seen in famous armories all over the world.

TACTICS
Before Combat The master swordsrack follows orders to the best of its ability but works best when told to sit in a room and guard the swords it holds. When a creature attempts to take its swords without giving the proper command word or trigger (set by its creator), it will unfold and attack.

During Combat The master swordsrack is a peerless swordsman and will use its combat feats to their utmost. It will attempt to trip and disarm foes at every opportunity and will make use of its spring attack to trip pursuers on the way to its target. Like most constructs, it will attack the nearest target relentlessly until dropped before moving on to the next one.

Morale The master swordsrack is a fearless combatant that won’t shy from a fight without orders to do otherwise.

SPECIAL ABILITIES
Practiced Swordhand (Ex) The master swordsrack treats all one-handed weapons as light weapons when beneficial to do so.

Uncanny Skill (Ex) The master swordsrack gains bonus combat feats as a fighter equal to its hit dice. In addition it gains a normal feat progression despite having no intelligent score so long as it takes combat feats. It treats its HD as fighter levels for the purposes of qualifying for feats and need not meet any mental requirement for feats. It must still meet any feat or physical score requirements to qualify for feats.

Wield Any Weapon (Ex) The master swordsrack is proficient in any weapon it can hold. It also automatically succeeds on Use Magic Device checks to wield weapons with racial, alignment, or class requirements. (For example a master swordsrack can wield a holy avenger as if it were a paladin.)

The master swordsrack was built with the adage that a player could have any magic weapon they desire so long as they can pry it from the cold dead hand of the creature wielding it. Putting different weapons into the sword rack changes the level of threat it poses. GMs are encouraged to adjust the challenge rating of the creature depending on the kinds of weapons the sword rack carries.