Skip to content
Home / Delve into the Depths in the Kobold Blog / Courts of the Shadow Fey: a Public Report 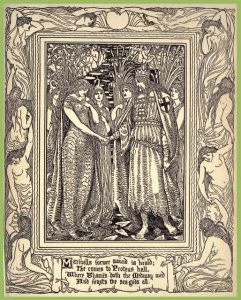 Open Design’s own 4th Edition patronage project, Courts of the Shadow Fey, is all up in your stuff, stealing your babies and snorting your finest dreams. Because that’s just what fey do.

The design for Courts of the Shadow Fey has a twist at its heart, like a lover’s betrayal. It begins with assassins, arcane mysteries, and shadow magic, but once the PCs complete the first section and arrive at court, it contains a section of good-old-fashioned social climbing.

This is, naturally, a very chatty sort of design. The NPCs have goals they want to accomplish, the various factions all want to use the PCs against their enemies, and no one initially thinks all that much of a set of mortals come to visit the Plane of Shadow. Strangers come and strangers go, after all. Shadow magic is forever, and the fey can afford to be patient. This puts the paragon-tier PCs in the unusual position of being newcomers who can upset the balance very quickly, or who can hide their skills and talents for a while, the better to make a big splash when they do reveal their true power.

As a piece of adventure design, this is one of the more challenging types. It’s not a straight combat with tactics and terrain, which the D&D rules have always handled well. It’s not a straight-up set of skills, which the game has handled with varying degrees of elegance since 2nd Edition D&D first brought non-weapon proficiencies into the game. It is, rather, a chance for both the GM and the players to try a wide range of things that may not be all that well supported by the rules.

So, how the hell do you design for freeform play? …

The answer is that you have to trust the GM and give them enough tools to respond well to the players, without overwhelming them with detail. To simplify things for the GM, I designed a basic set of “status” rules, describing what status is gained or lost by particular actions. The heroes don’t start with much status, but they need it as a resource to succeed at certain tasks. So, gathering status is the courtly equivalent of gathering magic or treasure; there’s a dozen ways to do it, and it’s up to the GM and the players to work within the sandbox to make this section of the adventure work.

As you might imagine, the project patrons have been giving these rules a close look, and I’ve been working hard to adapt them as treasures in combat and skill challenges in this section. We have enough of a framework to write the first set of deadly social encounters (it doesn’t pay to piss off the Demon Lord of Roaches). Playtest, though, will be the ultimate proof of this new set of mechanics; I think it will be easy and useful, but really, I would think that.

If you are curious about how the status rules work, or just want to contribute to the published stats for the Demon Lord of Roaches, then by all means, become a patron today.

What have you done for me lately?

3 thoughts on “Courts of the Shadow Fey: a Public Report”