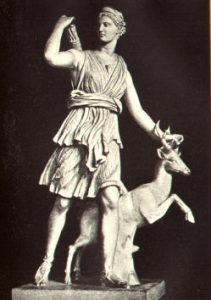 A character who favors ranged attacks has many ways to master the bow, and the schools presented in this article series give you some interesting options to round out your player character. This week, we present another school of archery styles by Rich Redman. The first and second parts are available, too.

Initiates of the Eldritch Arrow Style combine magic with their bow attacks. They are as likely to be clerics or druids as they are to be bards, sorcerers, or wizards.

You can make a Knowledge (local) check to learn about the Eldritch Arrow Style.

Arrow Counterspells (Sp): You can ready an action to shoot an arrow as a counterspell. You must succeed on a Spellcraft check (as per the rules on counterspells) to correctly identify the opponent’s spell. If you do, and if you hit the target, your arrow does no damage but you counter the opponent’s spell. You do not need to be able to cast the same spell, and this ability does not use any of your spells or spell slots.

Arrow Touch Attacks (Su): As a full-round action, you can make a ranged attack to deliver a spell with a range of touch. Make a normal ranged attack roll against the target. If you hit the target, you do not need to make another attack roll to hit with the spell. It takes effect normally. You expend the spell, or spell slot, just as if you cast normally.

You can cast the spell in advance. You can “charge” an arrow with a spell. To do so, cast the spell normally. It has no effect until you fire the arrow. You can hold that charge for a number of rounds equal to your caster level without a concentration check. If you need to hold the charge longer, you must succeed on a concentration check (DC 15 + spell level) every round beyond your caster level. If you fail, you lose the charge with no effect. Either way, you expend the spell, or spell slot, just as if you cast normally.

Bonus against SR (Su): This ability provides a +2 bonus to caster level checks to overcome spell resistance when using arrow touch attacks at 7th- and 17th-levels. If you learn both secret techniques, your total bonus is +4.

Overcome Incorporeality (Su): Your bow attacks, and your arrow touch attacks, ignore the effects of incorporeality. They do full, normal, damage against incorporeal targets.

Spellcraft Bonus (Ex): You gain a +2 bonus to all Spellcraft checks at 11th-level and 15th-level. If you learn both secret techniques, your total bonus is +4.

More to come in upcoming weeks!