Skip to content
Home / Delve into the Depths in the Kobold Blog / Trapspringer: Ustalav Doll Casket

The box looks like a fat, heavily pregnant woman with fangs instead of teeth. Her copious belly contains a rather grotesque image of an infant with three heads, each with an open mouth like a key-hole.


No ordinary receptacle will do for treasure in the Land of Gothic Horror. 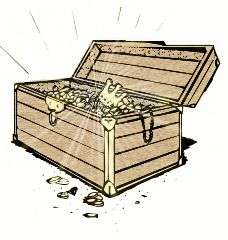 The infuriating Ustalav Doll Casket is not one but five (and sometimes many more) chests fitted one within the other, each of which is dangerously trapped. These traps are made more infuriating by the presence of three or more choices of keyhole for each casket. Furthermore, the colossal weight of these chests makes them virtually impossible to shift — any exploration and lock-picking usually has to be done on site. Each chest comes with a dozen possible keys for each chest, and only the owner is ever told which key fits which lock and which lock is not trapped. Any would-be-thief must make a search check (DC 30) to ascertain which lock is correct to pick and must then pick that lock (DC 30) to avoid setting of the chest’s trap.

Doll Casket Maesters are greatly respected (or more often enslaved) in Ustalav, and spend their lives creating new and more terrible treasure chests for their masters. This is one of their finest.

Outer Chest – The Grinning Spectacle of the Dead Ravens

This chest is made of iron, and resembles the figure of a fat bloated pregnant woman. An unkindness of ravens, rotting and worm-eaten, are flowing from her mouth. Her eyes and mouth have keyholes.

Second Chest – The Vile Vision of Birthed Imps
Infuriatingly, a second iron chest fits snugly inside the first. The woman figure is again represented: more wasted in appearance, and birthing three imps. Each imp holds a lamb’s head with an open mouth that bears a key-hole.

The creature summoned, an otyugh, is alive with fecal rot, Lice dance across its back and flies swarm around its mouth. The save DC of the filth fever this otyugh carries is 18.

Fourth Chest – The Screaming Glory of Immolation
Small shock then that yet another chest is within, this one depicting the woman in flames, screaming as she looks up at you, her mouth drawn in a yell of agony. Three holes are driven into her neck.
Screaming Glory of Immolation Trap: CR8; magical device; location trigger; no reset; spell effect (summon monster VII, 13th level wizard), Search DC 30; Disable Device DC 30, Market Price 4,500 gp, 360 XP.

The creature summoned, a huge fire elemental, has a voice like an insane furnace.
Elemental, Fire, Huge CR 7
hp 136 (MM 99)

Other Doll Caskets
Hundreds of doll caskets exist, and though most come from Ustalav, some traders have mastered the art. No two caskets are alike and each bears the cruel hallmark of their creators. Those most feared are the ones created by the infamous trio of Carrion Hill Casket Maester’s – Pireaeas, Voll and Shorgvv. A sample of each of their works is listed below:

The Biting and Severing Doll Casket of Lord Strohl
Created by Maester Shorgvv, the heads of the dolls within this casket inflict terrible severing bites – its final casket, the eighth casket of Strohl, releases a host of severing circular blades which fly in all direction from the casket and sever any limb they hit.

The Living Doll Casket of Queen Shesche
Carved by Maester Voll in 4585 from human flesh, this casket is an abomination. Each fleshy casket is fashioned from devil’s flesh made into revolting horrors that attack, and vomit forth the next casket when slain.

The Infamous Iron Golem Doll Casket of Orlorn
Probably the most infamous of all caskets was made by Otto Pireaeas. This casket was made of interlocking iron golems that resemble toad women. Each golem of the casket has its own unique attack, from the head-crushing merciless vice on the first casket to the diabolic severing claws of Orlorn on the last.

Like this week’s traps? Let us know in comments!