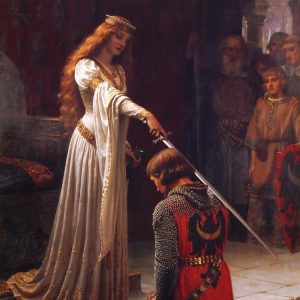 When you look at the mechanics available to players in 4th Edition, there’s a heavy focus on combat options. Even themes and backgrounds are often geared toward, or at least chosen for, optimizing a character’s abilities in combat. Tactical combat is one of 4th Edition’s distinguishing strengths, but it can feel like the rest of the game is an afterthought sometimes.

Players who are mechanically minded aren’t necessarily averse to roleplaying, but it can be hard to see the rewards for roleplaying beyond acquiring your next quest. Gaining XP or treasure for social scenes is the exception rather than the rule. So why would the player risk his or her most precious resource, which is time at the game table, on a crapshoot over the sure-fire reward system that is combat?

Transition scenes are an incentive system that encourages the players to help frame scenes in order to gain rewards they can use in combat or other situations. The scene may be a social scene or it may revolve around exploration or even combat. The key is that it has to expand the PC’s story, and the PC must be risking something to gain the reward. In this two-part series, we’ll first go over how to determine the type of scene and figure out the risk and reward for it. The second part provides you with guidelines and examples for how to frame, play out, and resolve the scene.

Determine the Type of the Scene: The first step is declaring that you want to begin a transition scene. The GM may want to suggest good places for scenes, but this is really a tool for the players. A PC is about to reveal something personal and take a risk to gain something, so it is very natural, and perfectly acceptable, for a player to request to start a transition scene.

The three types of transition scenes are social, exploration, and combat. Social scenes are the broadest type, representing characters interacting with each other. Scenes where characters are discussing their past, planning their next move, chatting up the mayor’s daughter, or talking their way into the duke’s gala are all social scenes.

Exploration scenes take the grid out of movement. They are about finding out what secrets lay ahead. Carefully making your way through the labyrinthine prison, scouting out ahead in the wilderness, and sneaking into your old thieves’ guild to swipe a map can all be handled with exploration scenes.

Combat scenes are the most common type of scene to be suggested by the GM. This is not meant to replace combat in general but should instead be used in place of combat that is too easy to be interesting or too difficult to give the PCs a real chance at victory using standard combat. Seasoned adventurers amid a bar brawl or a lone halfling being caught by an ancient red dragon can both be handled with a combat scene.

Backgrounds and themes are great fodder for scene ideas. They are mechanical representations of a PC’s history, and they help determine where a character came from in a way that is easy to use. Remember, a transition scene isn’t just a way for a player to get what he or she wants. They also reveal a bit of who a PC is.

Example 1 Set-Up: Rob knows that their next dungeon used to be the lair of a powerful wizard, so it will probably have arcane traps. He wants to set up a social scene, making use of his student of Bemmea background, where he remembers something he learned from a legendary mage.

Example 2 Set-Up: Mary knows her group has advanced well beyond that of the local lord’s goons, but she is still mad at the way he treated them at 1st level, and they could use some horses. She proposes a scene where they trounce some of the lord’s thugs and steal their new mounts.

The most common risks are action points and healing surges. Both these tools are temporary boons, automatically earned and meant to be spent. They already have value to the player, but if they are lost, then they will eventually be replaced. Action points are a great risk for scenes where there is little physical danger. They represent the character extending himself or herself in some way. Healing surges work better for scenes where the characters are at a risk of injury. They are an abstraction of a PC’s long-term health. When risking healing surges, 1 per tier is a good base value.

Rewards are more varied and should be inspired by the scene itself.

Action Points: Rewarded for boosts in a character’s confidence, karma, motivation, or a divine boon.

Automatic Surprise Round: Rewarded for recovering information on an enemy’s movement, a foe’s plans, or a location’s layout.

+2 Bonus to Next Skill Check: Rewarded for acquiring a new tool, making a new contact, remembering an old experience, or discovering a new trick.

Mundane Treasure: Examples include mounts, letters of marque, or access to an alchemist lab. Rewarded for thieving, sweet-talking, or dealing with contacts.

Temporary Damage Resistance: Resist 5 per tier against a specific damage type for one encounter. Rewarded for magical buffs or divine favor, or when building up an immunity.

Example 1 for Risks and Rewards: Rob decides that his character is not really in danger in this scene so he’ll be risking an action point. His reward will be a +2 bonus to an Arcana check when he next comes across an arcane trap. The GM thinks this makes sense and agrees.

Example 2 for Risks and Rewards: Mary doesn’t think these goons pose any real threat to her fighter, so she proposes risking an action point for the horses. The GM counters that while she may be a higher level, a mob could still get in a few good hits and suggests she risk a healing surge instead. Mary considers this and agrees.

Part 2 of this series will be available tomorrow, so keep an eye out for it!