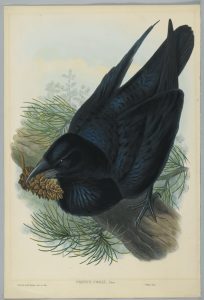 Trolls are rampaging through the countryside, destroying farms and killing entire herds of livestock. A band of freelance warriors have offered to put an end to the beasts. Before they agree to set out, though, they ask for a contract. As any savvy adventurer knows, it’s easy to offer a promise and to shake a hand. Putting your name to parchment, on the other hand, makes things a little more official.

When your employer is the city mayor, or a landed noble, finding someone to draw up a contract is simple. But what about when you’re helping out a small farm far from any major city? Where do you find someone who can write an agreement, and witness it, on behalf of both your employer, and the party?

Just look for the local Roost, and ask the Raven’s Quill Criers.

What Are the Raven’s Quill Criers?

The Raven’s Quill Criers is an organization dedicated to the written word and to the spreading of knowledge. The Criers write up legal documents for businesses, they compose letters for clients who can’t read or write, and in many places they also act as cartographers, providing maps to traveling merchants and others bound for the highways. Many times their members act as translators, and it’s not uncommon for the Criers to act as guides to a city. Perhaps the thing the group is most famous for, though, is that they’re the ones who read out the local news and announce new proclamations. The Criers always seem to know what’s going on. That comforts some people . . . and makes others quite suspicious.

The Raven’s Quill Criers are no strangers to suspicion. It’s been suggested by no few people that they’re little better than carrion birds, digging through other people’s business and poking their beaks where they aren’t wanted. On the other hand, though, some people see the Criers as a voice of truth, telling the facts that might embarrass the local power structure, but which the common people need to know.

The truth about whether the Criers are muck-raking busybodies, or heroic seekers of truth, is usually somewhere in the middle. On the one hand, people who want to hear the latest gossip are quick to buy one of the little black birds a drink; on the other hand, Criers are savvy enough to get just as much out of you as you get out of them. Experienced information brokers know that the best way to get the latest out of a Crier is to swap what you know for what the Crier knows, or for what this skilled knowledge gatherer can find out. Assuming, that is, you don’t have a sack of gold in your pack to buy the information you want.

What the Raven’s Quill Criers Can Bring to Your Game

The most obvious use for the Raven’s Quill Criers is a simple way to help move your plot along. If the party chose not to investigate a local crime boss, for example, then a news story about him might redirect their attention. The Criers can also act as a handy source of information for the party to tap, as well as a group with which to build a relationship over time. While the Criers might not know the answer to every question, they can likely toss out the names of other NPCs who would.

If you want the Criers to take a more active role in your plot, they could do so in many ways. For example, they might hire the party to see whether certain rumors are true before they begin spreading the information. They could act as benefactors to the party, trying to inflate their accomplishments to turn them into well-known heroes of the realm—possibly for less-than-noble reasons.

Another possibility for the organization is as a cover for something much more nefarious. For example, the Criers might publicly be an organization that operates on behalf of the people, but secretly they’re the eyes and ears of the king. Or, while the Criers disseminate gossip and other common happenings, they might be engaged in the business of disinformation, telling people there is no plague in the east, and sending agents to make sure those reports stop coming out. They might even, in extreme circumstances, make the news happen: assassinations, starting wars between nations, or even setting monsters loose on the countryside for political reasons.

Big or small, heroes or villains, background or foreground, the Raven’s Quill Criers are a handy way to fill in your world and to make telling your story just a little easier.