Skip to content
Home / Delve into the Depths in the Kobold Blog / Prepared!: In Its Horrid Wake 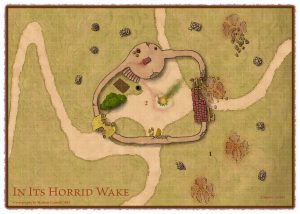 Cartography by Meshon CantrillWe saw it—don’t turn your heads. Up near Hilltop Crossroad and the temple. It walked south; the trees fell in its path. Even the moon hid. Gods help Father Dren…

“In Its Horrid Wake” is an explorable fifth edition location designed to offer a hard challenge to four 7th-level PCs.

A colossal demon has tread upon a sandy temple. Closely behind it, worshiping gnolls and slavering hyenas slay all living things that cross their path. PCs discover a grisly sight when they investigate—a pack of gnolls are finishing the ritual to summon a gnoll fang of Nkishi. They have readied a great gift in preparation of the fang’s arrival: the temple’s sacred scythe. PCs must carve a path through hyenas and gnolls to reclaim the temple before facing the fang and his newly acquired prize.

An acolyte named Ider pleads for the party to save his master. He smooths his torn robes and tells the PCs that his temple is under attack from dark forces after a huge beast passed by. He offers the PCs his jewelled prayer mantle (60 gp) to investigate and return the temple’s holy symbol (a scythe) to him.

First a great evil passed; it crushed the graves and most of the east wall as it went. We cowered in the stores—overwhelmed by fear. We spent the next day in shock and prayer. The following night, the unearthly howls began. Soon after, they came. A horrible pack—eyes aglow in the darkness. I fled—he remained…his screams haunt me.

The scythe is the temple’s holy symbol. The gnolls found it, covered it in their foul excrement, and transformed it into an instrument of evil. When wielded by the fang, the scythe has several effects:

Spellcasters whose primary attribute is Wisdom become aware of the following when they are within 20 ft. of the scythe.

Numerous stone cairns have been erected in the grounds of a small walled temple. Great clawed footprints press into the grass and travel from north to south; the cairns directly in its path have been scattered and destroyed. The wind carries a foul smell from the temple, and smoke rises from within. Unsettling yips and stirring can be heard among the ruined monuments.

The cairns contain the remains of the faithful. They provide half cover to adjacent combatants. The destroyed cairns create difficult terrain. A DC 12 Wisdom (Perception) check reveals the smoke is unnaturally thick. A DC 14 Intelligence (Arcana) check confirms the smoke is rising from ritual magic. Lurking in among the cairns are 5 hyenas. They gnaw on the bones unearthed by the demon’s passing. They are bolstered by having such close contact with the greater evil; the hyenas receive +1 to hit and gain the panther’s pounce ability. The hyenas attack loudly and alert the gnolls inside the temple. On round two, three gnolls arrive at one of the temple’s entryways and fire their longbows at the PCs. They switch to melee attacks when pressed. The gnolls keep the party occupied as the gnoll pack lord finishes summoning a gnoll fang of Nkishi. Move the action to area 2 when the PCs are within 10 ft. of a doorway into the temple.

Entrails are strung up around the doorways—a grim decoration that confirms the fate of the priest. The temple’s open-air worshiping area is horribly desecrated. Dark smoke rises from around a burning pyre of furniture and temple items. A towering canine brute plants an excrement-covered scythe into the ground beside the fire, readies its glaive, and charges.

The gnoll pack lord joins the fray. It incite(s) rampage if any gnolls remain. The round after the pack lord attacks, the fang leaps from the smoky blaze and lands beside the scythe. The hyenas are bolstered as detailed in area 1. The fang retrieves the weapon and all three attack the party. The fire burning here is magical in nature. Used by the gnolls to summon the dreaded fang, the flames drive the evil pack into a frenzy. As long as the fire burns, on initiative 10 all gnolls and hyenas within 25 ft. of it regenerate 1 hp. The fire can be extinguished with a create water spell, or with a DC 10 Strength (Athletics) check to scatter the fire’s fuel.

From the smoke and flame a charred canine monstrosity leaps toward the scythe; its long teeth glow like smouldering embers. With a quick jerk, the beast frees the scythe and cuts the air menacingly with it before bounding into battle.

The fang prefers to be at the center of melee, engaging as many targets as possible with Abyssal Harvest.

The gnolls carry 30 gp in total. The pack lord wears several valuable trophies from his previous raids: four gold and silver earrings (20 gp), a fine leather belt with a copper buckle depicting a ram’s head (10 gp), and an archer’s gauntlet made from boiled leather and silver (15 gp).

Once cleansed, the bone and wood scythe gleams an alabaster white. It is worth 70 gp. The acolyte happily trades his mantle for the scythe and offers his knowledge and healing for a week. He will not fight, and when out of combat he confers advantage to all Wisdom (Medicine only) and Intelligence (Religion only) ability checks made by the PCs.

7 thoughts on “Prepared!: In Its Horrid Wake”