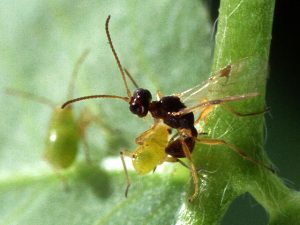 The patrons and designers have completed the first drafts of the The Lost City of Kadralhu patronage project, and now is a great time to jump on if you’re curious but haven’t yet signed up. This week, we continue to present pages from Logan Bonner, Michael Furlanetto, Tracy Hurley, and Quinn Murphy.

Later this week, we’ll show you themes for the new oklu race and the section about the tainted plant Malsalix. Now, though, we present the trignotarbs.

Long thought extinct by even the eldest eladrin sages, trignotarbs are queer amalgams of parasitic wasps and webless spiders. They embed their larvae in living hosts, who are drained of both knowledge and life by the insectile parasites. The larvae then molt into gardeners, hunters, and savants with the most powerful eventually attaining the rank of queen. Other castes may exist yet unknown to scholars…

Thousands of larvae lurk on every trignotarb, and they even haunt the ground on which trignotarbs have perished. The larvae hunt for living creatures, sapping their prey of life as they burrow. Once the prey is weak enough, the trignotarb takes over its mind.

TRAITS
Parasitic Possession • Aura 1
Attack—+19 vs. Fortitude.
Hit—The target loses one healing surge. If it has no healing surges remaining, it is dominated by the larva.

A creature that falls victim to a trignotarb larva spends its first day dominated. Next, it progresses to the recently infected stage. Add the following trait to its statblock.

After 1 week, the larva within a recently infected creature progresses to the nearly mature stage. Replace the appropriate elements of the host creature’s statblock with the following. Retain two powers—one of which should be an at-will power—using the original damage and effects. Remove the other powers and traits.