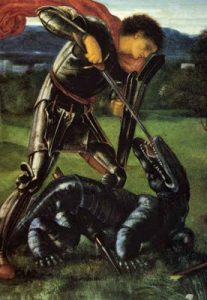 In the first part of this series, we explored some things you could do to speed up combat without adjusting the rules. The following are three simple ways to speed combats up by making rules modifications, and each one has an increasingly larger effect on the game system than the one before it.

One of the great things 4E brought to D&D was the minion. They are designed to take a hit and go down—never to be heard from again. Two-hit minions fit a similar narrative situation as the standard 4E minion. They are the mooks of the dungeon and are designed to be mowed down in droves. Using them will mess with the healing economy of the game a bit, but because you will get more encounters resolved in a session, good pacing of the encounters can balance this.

This creates a monster that will go down in two hits, so typically it will last 3 rounds and make two successful attacks. It’s easy to manage and it can still do reasonable damage with its hits like a normal monster. Because it gets bloodied and dies, it triggers all the PC mechanics that belong to those elements of the rules. The only thing it doesn’t trigger are effects that depend on killing a “nonminion” creature.

This option disadvantages characters who are designed to do very high damage intending to kill monsters in 1 hit ideally while providing an advantage to characters who can routinely attack the same monster twice in a single round.

In adventure design, the one thing to consider is that an encounter consisting of two-hit minions alone should not count for a milestone on its own unless the PCs fare particularly badly against it.

One popular solution for faster combat is to halve the hit points of all of the monsters and give them a bonus to damage. This results in monsters that die faster but do more damage, which, when done correctly, results in the same resource management problems for the players as a normal encounter but is faster because the monsters don’t need as much effort to kill.

To keep it simple, make the following adjustments.

This method results in the fewest number of changes, but it can result in combat not speeding up appreciably if the main delay in the combat is centered on player decision-making speed. Players who already hesitate will still hesitate in their choices because, ultimately, the combat will mechanically balance out to be very similar to normal 4E combat in terms of danger.

Another approach that can be used with this is to leave the damage values alone entirely and simply halve the hit points of everything—PCs included.

Overall, this method favors characters with high single-attack damage output rates and provides a disadvantage to characters with low hit points who might normally take a hit only once or twice in a combat.

“Simplify opportunity attacks. I’d like to focus them exclusively as a penalty for breaking away from melee without disengaging.”—Mike Mearls (DnD Next Goals; Part Two)

Removing opportunity attacks completely would seem to be one solution. Many elements of the game depend on their existence, though, so modifying them is probably better.

This change should allow more freedom to move in combat and help reduce the decision time around movement for each player and the DM. The class most strongly affected by this is the fighter, since now monsters can move past a character of this class potentially with impunity. You can correct for this by amending the fighter so creatures provoke opportunity attacks by moving through its threatened area as well as by starting in it.

You can adjust the duration of combats in 4E in other ways, but before you start adjusting combat rules even a little bit, determine what causes you to think 4E combats are too long. Then check to see what your players think. If you find out what your players expect and determine what they see as being a problem before adjusting anything, you can set up your gaming table to meet those expectations and make wiser choices when it comes to rules modifications. Also, watch your players play for a period of time before implementing any rules-based solutions. If they aren’t already working together as a team, encourage players to do so (4E is definitely a team sport). Then, if everyone’s expectations are still not met, investigate and implement rules elements as a potential solution. Be ready to scrap what doesn’t work and try new things as you go, and continually ask for feedback from your players so that you all can set up the best shared experience possible.