Skip to content
Home / Delve into the Depths in the Kobold Blog / Book Review: Titans Rising: The Calling 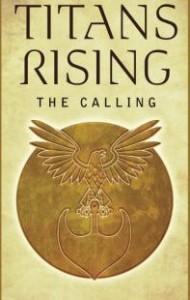 
Eight years after the first intergalactic war, known as the Sol War, unemployment amongst veterans is rampant and that percentage is even higher for troops known as Specials. Specials are a breed of veterans with superhuman powers. Not knowing what to do with these “break open only in case of war” people, the government has chosen to restrict and disenfranchise them. These fallen gods among men sometimes take offense to that treatment and decide to operate outside of the law and societal norms. It is this deviant behavior that draws the attention of the government and forces them to establish a unit full of Specials to hunt down the deviant Specials who have gone off the reservation (for one of them, quite literally).

Enter Daniel Rooke, an up and coming NYPD detective who is chosen to lead this powder keg of a team. It’s bad enough that Rooke has been selected to run a team full of unique personalities. Add superhuman powers and a major lack of interpersonal skills on Rooke’s part and that powder keg just got placed in the middle of a fireworks factory during a 4-alarm fire. Rooke is recruited by Gen. Boatman, a Patton-like figure who, while a successful warrior, has morphed into a peacetime liability, like the Specials. It is Boatman’s job to not only recruit Rooke, but to also prepare him for the slings and arrows that his position will expose him to. This relationship in the book was one of the most difficult things for me to stomach. The fact that Rooke has no interpersonal skills was bad enough, but to watch the things that Boatman does to Rooke in the name of training actually angered me. These interactions were not a case of bad writing on Varni’s part—they were deliberate character flaws, but they still really upset me. I was in the military and there were a few technical issues in this book that bothered me, but, in Varni’s defense, I doubt that most of his non-military readers will notice those issues.

As the story progresses, we find Rooke trying to establish his position as the leader of the team, dealing with a hostile workplace (completely hostile in every aspect), a neighborhood gang, and a boss that prepares him for leadership by putting him in the worst possible situations as often as he can. The book takes us across the United States with Rooke and his evolving team apprehending and sometimes recruiting Specials. The book ends with a cliffhanger that will leave you wanting more.

Varni is on the right track with this book and he shows real promise as an author. The technical errors and the deliberately horrible interpersonal communications between characters are things that should be improved upon in the next book. The fact that there will (and should!) be a next book should tell you that this book, this series, and this author are worth your time and money.