Skip to content
Home / Delve into the Depths in the Kobold Blog / Book Review: The Silk Map 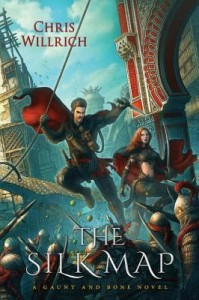 When we last encountered our heroes Persimmon Gaunt and Imago Bone at the end of the novel The Scroll of Years, they were forced to make a choice—a choice that no parent should ever have to make. To protect their child from several very powerful evil forces, they had to trap their son named Innocence along with the daughter of their ally in a pocket dimension that can be accessed only through a magical scroll. To keep these children safe, Bone was forced to drop the scroll in the sea to keep it from those who would do harm to him and his. To find the scroll and to save their children, Gaunt, Bone, and Snow Pine embark on an epic quest. Their first stop is to travel even farther to the east to consult the great demi-god Monkey for sage advice. As with all things dealing with Monkey, there is a price. Monkey knows how to get to the scroll, but, for the information, these parents must bring Iron Moths back to Monkey. Iron Moths’ cocoons produce the almost magical iron silk (think fantasy Kevlar). But a quest is only a quest if it is difficult, and this one makes difficult look easy.

To complete their quest, Bone, Gaunt, Snow Pine, and several colorful characters must find the missing pieces of the Silk Map that reveal the secret location of Xambala, the home of the mysterious Iron Moths. To get there, they must traverse the Silk Way, which is a thousand mile trade route bridging the gap between east and west. Bone and Gaunt and the rest of their party are not the only people interested in the map and the treasure of the Iron Moths. Along the way, they meet Western treasure hunters, a nomad princess and her estranged sister, a secret society hell-bent on guarding their moths and the hidden paradise that they inhabit, a blind mystic warrior, and a homicidal/bipolar flying carpet. What could possibly go wrong?

I was blown away by Chris Willrich and what he was able to pull off with his novel The Scroll of Years. I came into The Silk Map with great expatiations, and, for the most part, they were met and even exceeded. This is a weighty book—I don’t just mean the actual shipping weight or even the page count. I mean this book will displace brain cells—and I’m talking about the kind of displacement we all need every now and then where you cock your head to the side and look at the world around you in a new way, even if it is only for a few seconds. The Silk Map confirms that Willrich doesn’t do anything in half measures. This book, like The Scroll of Years, has an epic fantasy feel to it, and it could have been broken into two books easily. Willrich decided to complete this phase of the story rather than watering it down or breaking it apart.

This book is a complex mechanism with many moving parts. Those parts come in the form of plot twists, complex characters, and the intricate environments that they inhabit. Once again, Willrich makes the environment feel like one of the characters and a very important one at that. Keeping with the epic feel of this book, Willrich has his characters travel vast distances to varied locations and made each location feel alive. Some authors tend to paint transient cities with broad brush strokes, but not Willrich. When Willrich describes a new city, it is like a gamer painting his or her favorite miniature. He describes the city in a way that forces the reader to see that city. Then, like the miniature, as you get closer, the details start to pop out one feature at a time.

Willirich was smart to avoid too much road time. In The Silk Way, a prodigious amount of miles are covered, and Willrich used this time to move the plot along while moving the characters to their next interesting location. That in itself isn’t a great feat, but Willrich avoided dragging things out just to squeeze in more descriptive text to try to prove what a command he has over the written word.

As you might expect, this novel wasn’t perfect. At times, things got confusing, and for about 90 percent of the book, I didn’t really like who Bone and Gaunt had become as a couple. Additionally, when dealing with a culture’s vision of paradise on earth, there always seems to be a group of dedicated defenders and tons of reincarnation. This book embraces those tropes. Willrich is good, but when characters start remembering who they were in past lives and it turns out that they are the same people that are mentioned in legends, and several characters go through this, the lines get blurred really quickly. I have read a few things on the circle/cyle of life/death/rebirth/reincarnation, and I still had to re-read several passages and do some backtracking to figure out who was who and when they were who they were.

As a couple, I love Bone and Gaunt—or, more accurately, I loved them, then I didn’t love them, but now I do again. Because of the loss of their son, their relationship has been strained to the point of almost breaking. These are human emotions that one would expect when their child is trapped in a pocket dimension, and Willrich did a great job of conveying that tension. The big problem is that he didn’t explore the depth of each character’s emotions dealing with the situation. You could taste the tension, but it went unexpressed until the end of the book, and by then it felt like a tidal wave of too little too late. Gaunt is a poet and not only was there much less poetry in this book than there was in The Scroll of Years, but not enough of what was included in this book expressed her longing to be the mother of her child or how she felt about Bone because of the tough choice he had to make for his child’s safety. I also noticed a few inconsistencies in the character’s behavior: At times both Bone and Gaunt spoke like Yoda, and at others they reverted back to their “Western ways.” Even Bones’s treatment of the flying carpet was inconsistent. One minute he was treating it with respect, then the next he was claiming that it was nothing more than a magic means of conveyance, with no real reason given. I don’t doubt that Willrich knew what he was doing when he wrote that encounter into the book, but as a reader I just couldn’t follow his line of thought.

The Silk Map is an epic addition to the Bone and Gaunt storyline. Yes, it can stand alone, but why, as a reader, would you want to deny yourself the pleasure of reading The Scroll of Years as well? This book does take concentration, and if you are not careful, you will miss some really insightful fortune cookie wisdom. Willrich, like the Iron Moths in his story, created a thread that is strong, valuable, and sought after. I am excited to see what happens next, and I will never look at burping the same way again thanks to Willrich and The Silk Way.