Skip to content
Home / Delve into the Depths in the Kobold Blog / Book Review: The Doctor and the Dinosaurs 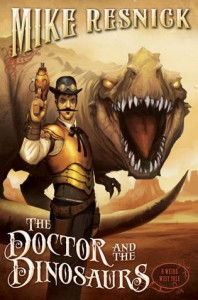 The Doctor and the Dinosaurs

Ladies and gentleman, welcome to the historical all-star game. Today’s game will played in the Weird Wild West. We have some of history’s greats such as Doc Holliday, Geronimo, Teddy Roosevelt, Cole Younger, Tom Edison, and Ned Buntline versus the entire Comanche nation and dinosaurs! If that doesn’t sound like a great book, then you need to have your brain pan checked. In The Doctor and the Dinosaurs, this cast and more find themselves in Wyoming at the request of Geronimo to stop infamous paleontologists Edward Drinker Cope and Othniel Charles Marsh from digging in sacred Comanche burial grounds to get to dinosaur bones. Doc Holliday is within hours of his death, and Geronimo grants him one more year of life if he will stop Cope and Marsh from digging, which in turn will keep the Comanche medicine men from resurrecting dinosaurs that could threaten the entire nation, including Geronimo’s Apache tribe.

What a treat! Normally ensemble novels like this favor the entire cast rather than the individual characters. That is not the case with The Doctor and the Dinosaurs. Resnick has taken some of the most interesting characters from history, researched them, held a séance spoken with their spirits, and included them in a fantastic pulp novel that brings them back to life. This isn’t Resnick’s first rodeo, and it shows. The title of this book alone shows that he is fearless when it comes to writing. Not many authors would take on this many big historical figures and make them feel alive and real. Combine that with dinosaurs, and you can see what an accomplishment this book is.

Technically, someone might call this a steampunk book, but I would have to disagree—well mostly disagree. There are fantastic gadgets that were not possible during that time, but most of them run on electricity, not steam. There are goggles—actually the cover shows none other than Doc Holliday wearing them, but Resnick’s almost mocking introduction of them into the story and their complete lack of air time shows me that he feels the same way about those normally useless “props” in steampunk novels and on steampunk cosplayers. If I had to classify this novel, I think I’d have to call it pulp fantastic; weird west would fit, but the word “pulp” really captures the spirit of this novel.

This is how wonderfully pulpy this novel is periodically: It has pictures in it. Not only that, but they’re the kind of pictures you would expect to find in a Western dime novel. The art is stylistic and wonderful: a picture of Teddy Roosevelt roping a brontosaurus? Yes, please!

As with any novel, there are a few things that were not spot on, but they were minor. I felt like Resnick did such a great job of setting the whole story up that by the time Doc and Teddy got to the actual dig sites, some of the activities were filler. Resnick portrays Roosevelt as the go-getter he was in real life and yet, at points, it seemed like he held back from accomplishing the mission he set out to accomplish with Doc Holliday. I do appreciate that Resnick tempered and paced him by distracting him with the opportunity to gain more knowledge, but it still felt a little out of character. I really enjoyed the banter that the camp time caused, but a little more dinosaur and a little less Cope and Marsh would have been appreciated. I get that their feud was monumental, and it ended up breaking both of them, but dinosaurs, Resnick, dinosaurs!

Beyond the goggles, Resnick did a good job of keeping the technology to a minimum. There were a few cool gadgets that enhanced the story without dominating it. But by far the absolute best part of this book was Doc Holliday. I have seen the movie Tombstone, and in my mind Val Kilmer IS Doc Holliday, thru Resnick’s writing. I could hear Kilmer’s (I mean Holliday’s) voice uttering those snarky and impeccably timed comments that made him such a rich character. The other characters were really well done, but there was something special about Resnick’s treatment of him.

This book is a fun and dusty romp through an alternate history that I would have loved to be a part of. With a few more dinosaurs, I would have had no bones to pick with this book. It’s bully!